Each year for Giving Tuesday (the Tuesday after Thanksgiving), Sea Turtle Conservancy (STC) targets one of its most pressing sea turtle protection projects as the focus for this annual charitable event. The campaign starts with a pledge from STC’s Board of Directors to match the individual donations provided by STC members and supporters, up to a certain amount. This year’s challenge match from the Board will be $35,000, which means our Giving Tuesday fundraising goal is $70,000 or more.

All funds donated for this year’s Giving Tuesday will be directed toward STC’s turtle research and protection efforts in Tortuguero, Costa Rica—the birthplace of sea turtle conservation. STC’s work in Tortuguero began back in the 1950s, making it the longest-continuous turtle conservation project in the world. Many of the turtle monitoring and protection efforts developed at Tortuguero are used today by sea turtle conservationists around the globe. In fact, many of the world’s leading sea turtle scientists and project leaders got their start as STC Research Assistants in Tortuguero. Most importantly, as a result of STC’s efforts over the last six decades, the green turtle colony that nests at Tortuguero recovered from near the brink of extinction to being one of the two largest green turtle populations in the world.

With all the history and success of this project, STC is concerned knowing that the gains made on behalf of Tortuguero’s green turtles could be in jeopardy for reasons that are poorly understood. Our strategy of systematically reducing threats to sea turtles both on the nesting beach and at sea produced measurable results over the decades. Beginning in the late 1970s, approximately 25 years after conservation efforts started at Tortuguero, the green turtle population began increasing in size. The timing was not a coincidence. Green turtles take at least that long to reach maturity—meaning hatchlings that were protected and released in the 1950s should have started returning to Tortuguero as adults to nest by the end of the 70s. That’s exactly what our data indicates happened.

From the 1960s up to 2012, the number of green turtle nests deposited in Tortuguero grew by over 600%. During high nesting years, it was common to document well over 150,000 nests in a season. The establishment of Tortuguero National Park, the elimination of global sea turtle trade, the banning of turtle and egg consumption at Tortuguero, and the development of sea turtle eco-tourism as an alternative livelihood for the local community all had positive impacts—proving that sea turtle conservation efforts developed by STC worked. Tortuguero green turtles were on the path to full recovery. 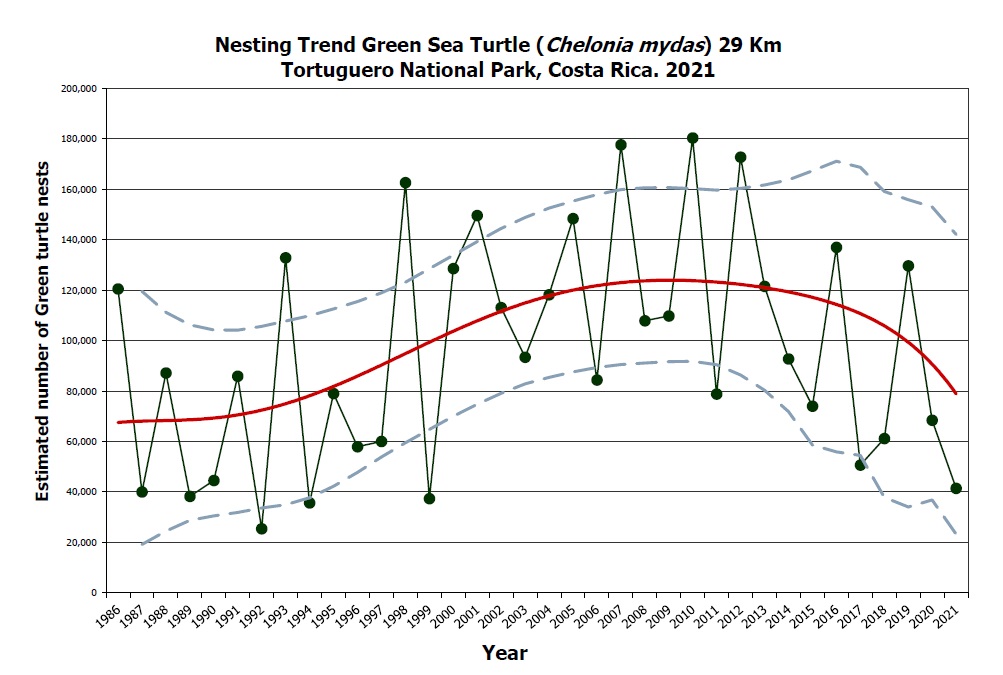 But something unexpected began to happen over the next decade. Starting in 2013, we began documenting a declining trend in nesting. It wasn’t a dramatic drop. In fact, given the phenomenal growth of the population prior to this time period, STC was not particularly worried about a few “down” years of nesting. The factors that cause annual turtle nesting numbers on any beach to ebb and flow still are not well understood. However, our cautious observation of the nesting trend turned into real worry in 2021, when after several down nesting seasons, the number of nests dropped to the lowest level in 25 years (about 40,000 nests for the entire season). This is still a lot of green turtle nests, and it reaffirms Tortuguero’s global importance for this species. Nevertheless, it sparked worry knowing that a little over ten years ago the number of nests hit 180,000 during a single season.

While our preliminary analysis of the 2022 nesting season indicates an encouraging uptick in nesting, the trend over the last decade still has us concerned that something unusual is happening. And that’s bad news for green turtles throughout the Caribbean and Atlantic. With funding raised through this year’s Giving Tuesday campaign, STC will launch important new studies and conservation efforts to help identify and address the threats that have caused the population decline. There probably is not a single “smoking gun.” Rather, it’s more likely that the collective impact of several threats is affecting the population. Our work will focus on identifying new marine foraging sites used by green turtles where they may be experiencing previously-undocumented hunting pressure. We also will work more strategically with the community and natural resource agencies in Tortuguero to curtail illegal hunting of turtles and eggs, which increased dramatically during the pandemic and still remains at an elevated level. It is entirely possible that unforeseen factors related to climate change could be impacting turtle reproduction, so this is another area where our focus will turn. 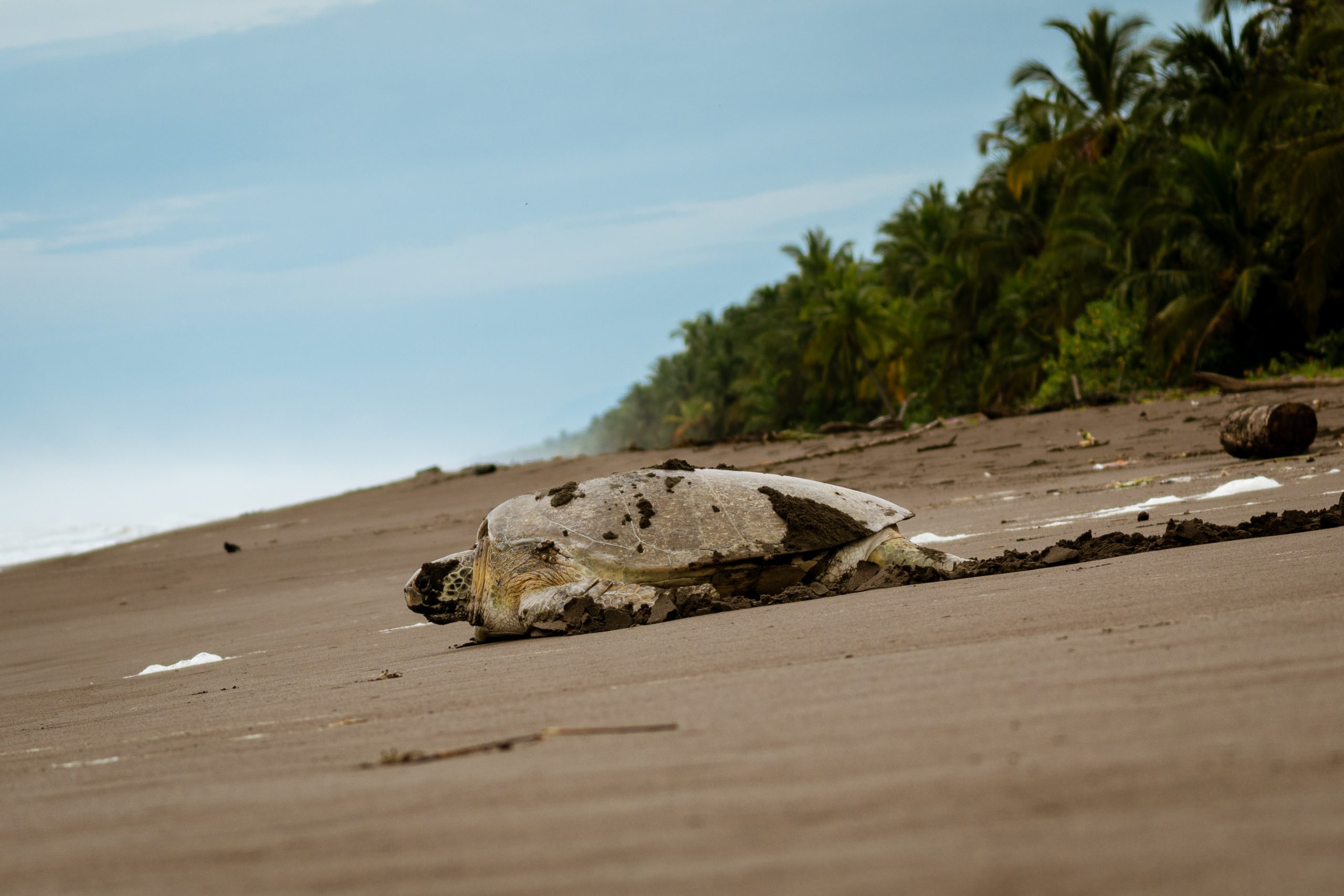 STC has proven that it has the skill, dedication and tenacity to ensure the long-term survival of sea turtles. We will not allow our decades of success on behalf of sea turtles at Tortuguero to be undone, but we need your help. Please consider making a special donation for this year’s Giving Tuesday (donations will be accepted for this purpose through the end of the year).

Comments Off on Help STC Raise $70,000 for Urgent Turtle Research and Protection Efforts in Tortuguero this Giving Tuesday!

Help STC Raise $70,000 for our work in Bermuda this Giving Tuesday! 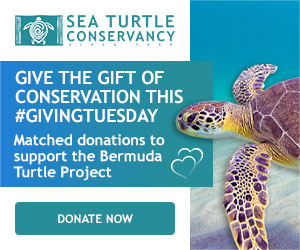 Sea Turtle Conservancy (STC) is hoping all of its supporters will participate in this year’s Giving Tuesday Campaign, which seeks to raise funds to support a health assessment of Bermuda’s sea turtles. Though not as well-known as Black Friday or Cyber Monday, Giving Tuesday, which occurs the Tuesday after Thanksgiving (November 30 this year), is one day when everyone can join together to make a huge difference.

For Giving Tuesday last year, STC supporters raised more than $50,000 for STC’s In-water Research Project in the Gulf of Mexico. STC has set its sights even higher this year, and we are confident we can reach our goal of $70,000 for Bermuda’s sea turtles thanks to generous pledges from STC’s Board of Directors to match every dollar donated up to $35,000!

Through the Bermuda Turtle Project (BTP), for over 50 years Sea Turtle Conservancy and its partners in Bermuda have been monitoring juvenile sea turtles in their marine environment to track how these animals are doing at a critical life stage. The BTP is unique because it allows for the study of sea turtles in their developmental habitat – a place where young sea turtles from around the Atlantic and Caribbean congregate to grow up.

Over the last several years, the BTP has observed an ecological calamity unfolding in Bermuda that has resulted in a massive die-off of seagrasses—the main food source for juvenile green turtles. As a result, sea turtles are disappearing from Bermuda at an alarming pace, and many of those remaining appear to be in very poor health. Expanded research and conservation efforts are needed urgently to fully understand and respond to the complicated factors at work. The ecological changes in Bermuda almost certainly can be traced to water quality degradation associated with nutrient runoff from the island, combined with rising ocean temperatures and disturbance by human activities.

Through this year’s Giving Tuesday campaign, STC is raising funding to support a health assessment of Bermuda’s sea turtles, which will include a comparison with healthy turtle populations in Florida. This baseline information will allow us to better understand how the seagrass die-off is impacting Bermuda’s turtles so we can best address this problem in Bermuda. STC also needs funding to conduct vessel-based surveys around Bermuda to identify new areas where the turtles may be congregating in search of suitable food sources.

Finally, STC will use funding from Giving Tuesday to expand public awareness about the ways human activities—even in a place as remote and seemingly pristine as Bermuda—can threaten sea turtles and the entire marine ecosystem. The calamity unfolding in Bermuda has STC’s full attention, and we need our supporters to contribute this Giving Tuesday.

Help support STC’s Bermuda Turtle Project by donating to the cause in one of three ways:
1. Online at conserveturtles.org/GivingTuesday or facebook.com/conserveturtles
2. Call 352-373-6441 with your credit card info
3. Mail a check with “Giving Tuesday” in the subject line. All checks received with “Giving Tuesday” in the subject line will count towards the campaign, even if received after November 30.
Can we count you in for Giving Tuesday?

Comments Off on Help STC Raise $70,000 for our work in Bermuda this Giving Tuesday!

On November 28th, Sea Turtle Conservancy is participating in our 5th annual Giving Tuesday! Giving Tuesday, the Tuesday following Thanksgiving, Black Friday, and Cyber Monday, is a day of charitable giving around the world. This special holiday was created as a day where everyone is encouraged to contribute to non-profit organizations in their communities and around the world. #GivingTuesday provides one day to make a HUGE difference. For the past four years, STC has been very fortunate to receive incredible support from our friends and donors. Last #GivingTuesday, STC supporters raised over $40,000 in one day to support STC’s Florida InWater Project! In 2015, you helped raise nearly $30,000 for the Barrier Island Center’s education and community outreach programs.

STC asks for your help this year to support something close to our hearts, the Tour de Turtles. Started in 2008 by STC, the Tour de Turtles is a fun, educational journey through the science, research and geography of sea turtle migration using satellite telemetry. With help from sponsors and partners, this event follows the marathon migration of sea turtles, representing different species, from their nesting beaches to their foraging grounds. Each year, sea turtles are tracked for approximately three months as they leave their respective nesting beaches and race to complete a turtle marathon. The Tour de Turtles competitors will swim with the goal of being the turtle to swim the furthest distance during the migration marathon. This fun, family-friendly event kicks off every July at the Barrier Island Center in Melbourne Beach, FL, with the live release of two satellite tagged sea turtles!

Help STC reach its goal of $40,000 to support Tour de Turtles educational events and sea turtle outreach by donating to the cause in one of four ways: online at www.conserveturtles.org/ GivingTuesday, by calling 352-373-6441 mailing a check with “Giving Tuesday” in the subject line, or through our Facebook campaign. Facebook is matching all Giving Tuesday gifts up to $50,000 per nonprofit! All checks received with Giving Tuesday in the subject line, will count towards the campaign, even after November 28th, 2017. Funds raised will be matched one to one up to $20,000 by STC’s Board of Directors. Can we count you in for #GivingTuesday?