Description: The hawksbill is one of the smaller sea turtles. Head is narrow and has 2 pairs of prefrontal scales (scales in front of its eyes). Jaw is not serrated. Carapace is bony without ridges and has large, over-lapping scutes (scales) present and has 4 lateral scutes. Carapace is elliptical in shape. Flippers have 2 claws. The carapace is orange, brown or yellow and hatchlings are mostly brown with pale blotches on scutes.

Diet: The hawksbill’s narrow head and jaws shaped like a beak allow it to get food from crevices in coral reefs. They eat sponges, anemones, squid and shrimp.

Nesting: Nest at intervals of 2 to 4 years. Nests between 3 to 6 times per season. Lays an average 160 eggs in each nest. Eggs incubate for about 60 days.

Range: Most tropical of all sea turtles. Tropical and subtropical waters of the Atlantic, Pacific and Indian Oceans.

Threats to Survival: The greatest threat to hawksbill sea turtle is the harvesting for their prized shell, often referred to as “tortoise shell.” In some countries the shell is still used to make hair ornaments, jewelry, and other decorative items. 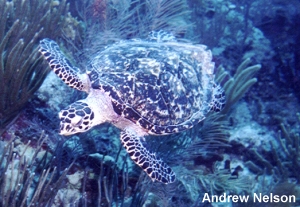 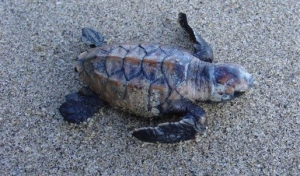