Information About Sea Turtles: Why Care? 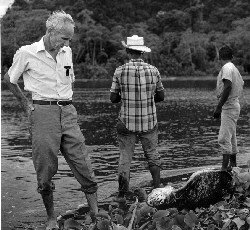 Much can be learned about the condition of the planet’s environment by looking at sea turtles. They have existed for over 100 million years, and they travel throughout the world’s oceans. Suddenly, however, they are struggling to survive — largely because of things people are doing to the planet’s oceans and beaches. But what does this mean for the human species?It is possible that a world in which sea turtles can not survive may soon become a world in which humans struggle to survive. If, however, we learn from our mistakes and begin changing our behavior, there is still time to save sea turtles from extinction. In the process, we will be saving one of the earth’s most mysterious and time-honored creatures. We might just be saving ourselves too.

1. Sea turtles, especially green sea turtles, are one of the very few animals to eat sea grass. Like normal lawn grass, sea grass needs to be constantly cut short to be healthy and help it grow across the sea floor rather than just getting longer grass blades. Sea turtles and manatees act as grazing animals that cut the grass short and help maintain the health of the sea grass beds. Over the past decades, there has been a decline in sea grass beds. This decline may be linked to the lower numbers of sea turtles.

Sea grass beds are important because they provide breeding and developmental grounds for many species of fish, shellfish and crustaceans. Without sea grass beds, many marine species humans harvest would be lost, as would the lower levels of the food chain. The reactions could result in many more marine species being lost and eventually impacting humans. So if sea turtles go extinct, there would be a serious decline in sea grass beds and a decline in all the other species dependent upon the grass beds for survival. All parts of an ecosystem are important, if you lose one, the rest will eventually follow.

2. Beaches and dune systems do not get very many nutrients during the year, so very little vegetation grows on the dunes and no vegetation grows on the beach itself. This is because sand does not hold nutrients very well. Sea turtles use beaches and the lower dunes to nest and lay their eggs. Sea turtles lay around 100 eggs in a nest and lay between 3 and 7 nests during the summer nesting season. Along a 20 mile stretch of beach on the east coast of Florida sea turtles lay over 150,000 lbs of eggs in the sand. Not every nest will hatch, not every egg in a nest will hatch, and not all of the hatchlings in a nest will make it out of the nest. All the unhatched nests, eggs and trapped hatchlings are very good sources of nutrients for the dune vegetation, even the left over egg shells from hatched eggs provide some nutrients.

Dune vegetation is able to grow and become stronger with the presence of nutrients from turtle eggs. As the dune vegetation grows stronger and healthier, the health of the entire beach/dune ecosystem becomes better. Stronger vegetation and root systems helps to hold the sand in the dunes and helps protect the beach from erosion. As the number of turtles declines, fewer eggs are laid in the beaches, providing less nutrients. If sea turtles went extinct, dune vegetation would lose a major source of nutrients and would not be as healthy and would not be strong enough to maintain the dunes, resulting in increased erosion. Once again, all parts of an ecosystem are important, if you lose one, the rest will eventually follow.

A plant or animal becomes extinct when the last living individual of its species dies, causing it to vanish from the earth forever. If there is ever a time when the last green turtle on earth dies, then never again will this magnificent creature grace our world.

Species have been going extinct for millions of years; it is a natural part of the evolutionary process. For example, most of the species that existed during the time of dinosaurs have perished. Many probably went extinct because of sudden geological or climatic changes — possibly because of a large volcanic eruption or because of a giant meteor hitting the earth. Today, however, species are going extinct because of abrupt changes brought about by humans. Habitat destruction, pollution and overconsumption are causing species to decline at a rate never before seen in history. This loss of species is eroding the diversity of life on earth, and a loss of diversity can make all life vulnerable.