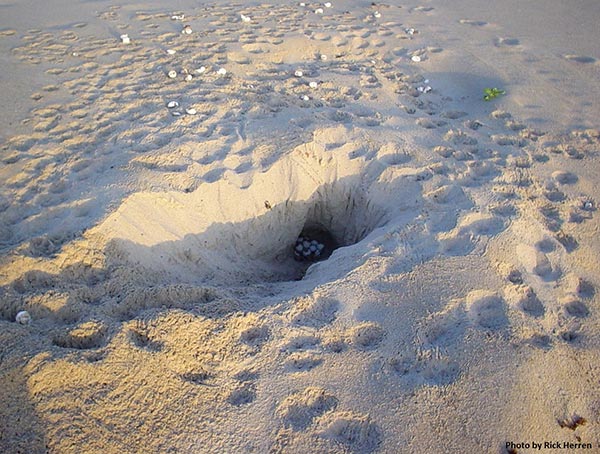 The Problem: Around the globe, sea turtles and their eggs fall victim to many natural predators. Raccoons, ghost crabs and sharks all play a role in the natural food chain as sea turtle predators. However, predation threats increase where human development reaches nesting beaches. For example, human trash left near the beach, unwittingly calls raccoons, coyotes, hogs and non-native species to the beaches to look for food. In some predation “hot spots” on nesting beaches in the southeastern United States nest predation can exceed 50% of all nests deposited. With as few as one in 10,000 eggs reaching adulthood, high levels of nest predation can have a detrimental effect on sea turtle reproductive success. 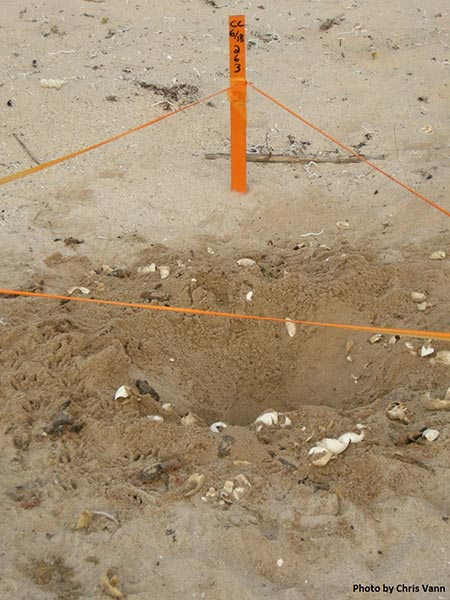 It is important to realize that humans have drastically altered coastal environments in the southeastern U.S. over the past 200 years. Sea turtle nest predators, such as raccoons and coyotes, no longer have natural predators themselves and they have adapted extremely well to living among people. In addition, people living near the beach may intentionally or unintentionally feed nest predators by leaving pet food outside or by having unsecured garbage containers near their home. All these factors result in higher populations of nest predators and, ultimately, higher sea turtle nest predation rates. 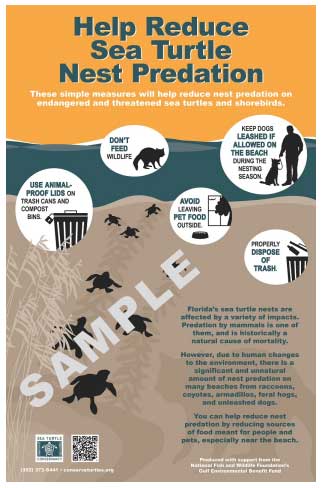 Nest predation can be a very serious issue in other countries as well. While domestic dog predation is a relatively minor problem in the U.S., in many parts of Central America, communities allow packs of domesticated dogs to run free in coastal villages. These packs of domesticated dogs, left unattended, can dig up many sea turtle nests in one night. Dogs have an exceptional sense of smell and they are very good at locating nests under the sand. It is not uncommon for them to dig up and eat the eggs and also the hatchlings as they emerge. There are even accounts of them eating adult nesting turtles. While sea turtles have special adaptations that allow them to be agile in the water, they remain very clumsy on land. They are not fast enough, or agile enough to escape land-based predators. They are unable to retract their heads and flippers into their shell, like a land tortoise, making sea turtles very vulnerable while on the nesting beach.

Species Affected: All sea turtle species are affected by predation, especially on eggs and hatchlings.

The Solution: People can play a vital role in decreasing the threat of unnaturally high levels of nest predation.