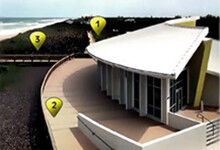 
Purchasing a commemorative plaque that will be displayed at the BIC overlooking the ocean. 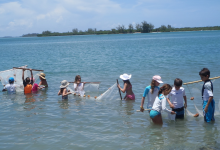 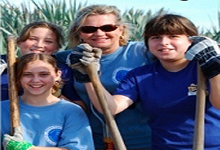 Volunteer
Educate the community and visitors at the BIC.
(BIC Volunteer Login) 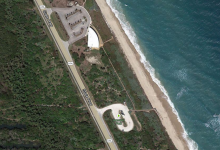 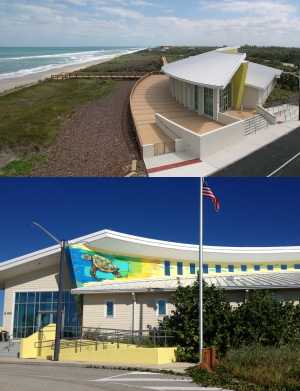 In North America, sea turtles primarily nest from North Carolina through Florida, with over 90% occurring in Florida. Within that range is the Archie Carr National Wildlife Refuge, a 20.5-mile section of shoreline between Melbourne Beach and Wabasso, along Florida’s east central coast. Since its establishment by Congress in 1989, the Carr Refuge, named after STC’s founding scientific director, has been a major success. The stretch of beach within the Refuge boundary is home to the most important sea turtle nesting habitat in the United States. More loggerheads nest within the Carr Refuge than anywhere else in the Western Hemisphere. In addition, over the past several years there has been a significant increase in both green turtle and leatherback nesting. Protection of these beaches is essential to the survival and recovery of these three species. 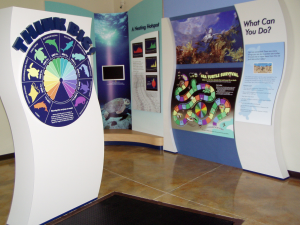 Activities in the BIC

STC has led efforts to increase awareness and support for the Carr Refuge by distributing educational materials, generating media attention about the Refuge, conducting guided sea turtle walks and giving presentations to local groups and schools. While these efforts have been effective, STC’s ability to sustain broad outreach programs in the Carr Refuge has been limited without a permanent educational facility located within the Refuge itself. The new Barrier Island Center will greatly improve outreach capabilities in the area.

As the Carr Refuge has demonstrated, people can live and play on important sea turtle nesting beaches without significantly affecting nesting success. But it requires a well informed public that is committed to behaving in a manner that doesn’t harm nesting turtles or their nests. As the human population on Brevard County’s coast continues to grow, STC and the Barrier Island Center will play an increasingly important role in protecting the fragile barrier island and its globally important sea turtle nesting beaches. 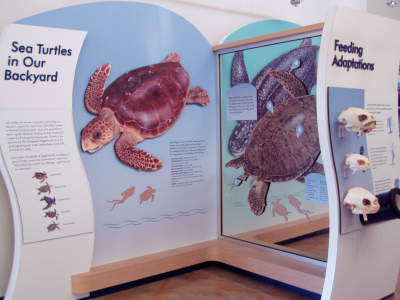 Displays in the BIC

The Barrier Island Center is a focal point for the Archie Carr National Wildlife Refuge and the associated barrier island by providing exhibit space, a presentation hall, a small research library and ongoing educational programs that promote stewardship of the area’s fragile natural resources. The Barrier Island Center hosts visiting school groups from throughout Brevard County, as well as local residents and tourists. The facility, its gift shop and its exhibits are open to the public.

The Barrier Island Center would not have been possible without the generous support of the Richard K. Mellon Foundation. The Mellon Foundation purchased the abandoned “Chuck’s Steakhouse” and donated the parcel to Brevard County for the purpose of building and operating an educational facility. The County also owns two adjacent parcels stretching across the narrow barrier island—from the Indian River Lagoon to the Atlantic Ocean. The proximity of these adjacent public lands will allow visitors a unique interpretive hiking trail that weaves through a cross section of all the barrier island habitats.