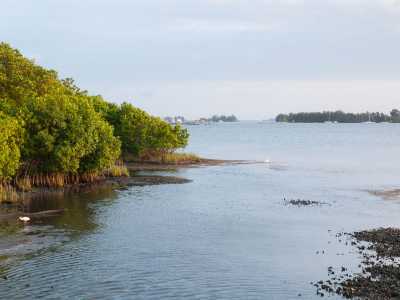 Lagoons lie between barrier islands and the mainland, while estuaries are found directly on the coast and are open to the near shore area. Estuaries and lagoons are areas where salt water oceans and fresh water rivers mix together, forming brackish water. Because lagoons receive some protection from a barrier island, they have less tidal flow and more standing water, while estuaries have strong tidal flows and little standing water. Lagoons and estuaries are very important because they support a diversity of plants and wildlife.

Lagoon are an important feeding area for juvenile sea turtles, that mainly feed on the large seagrass beds in the lagoon. Unfortunately, marine pollution has caused the health of the lagoon to deteriorate, and wildlife and plant abundance has decreased.

Salt marshes are areas of vegetation that are periodically flooded by ocean tides. They contain mostly tall, grassy plants, though the plant cover differs within the marsh according to small changes in elevation.

Marshes help stabilize sediments and buffer inland areas from storms. These communities are also very biologically diverse, supporting a wide variety of species ranging from fish to oysters. Salt marshes are also important feeding areas for wading birds, such as herons and egrets. The species that live in salt marshes have adapted to sudden changes in water level, water and air temperatures and oxygen levels in the water.

Mangroves receive an abundant supply of fresh water and perform important functions such as filtering out pollution, holding sediments, protecting the shoreline from erosion and providing habitat for a variety of animals.

Mangroves are the most biologically diverse of all the lagoon and estuary communities. They provide habitat for at hundreds of fish, reptile, amphibian, mammal and bird species. Commercial fishermen also depend on mangroves for the production of lobster, shrimp and snapper. Mangroves can be very susceptible to coastal development and pollution.