Barrier islands are naturally formed by shifting sands to eventually form an island.

Brackish
Lagoons lie between barrier islands and the mainland, while estuaries are found directly on the coast.

Nearshore
Seagrasses are flowering plants found in shallow coastal marine waters and are different than seaweed.

Coral Reefs
Numerous species of coral are found in worldwide.

Pelagic (Open Ocean)
Area of open water lying over and beyond the continental shelf.

Coastal communities utilized by sea turtles include a diversity of habitats including mangrove forest, lagoon, salt marsh, maritime hammock, barrier island, coastal strand, and the beach and dune system. Coastal habitats are home to a wide variety of plant and animal species, including many endangered and threatened species. They also provide valuable natural resources of both recreational and commercial interest to humans.

Native plants species, such as sea oats, beach cordgrass, dune sunflower and railroad vine, are saltwater and heat tolerant enabling them to survive long periods of dryness. Many native beach and dune plant species help to protect and stabilize beach dunes during storms with deep and multilayered root systems that help hold the soil and sand intact. If soil is eroded away during a storm, the newly exposed roots often form a root wall in front of the exposed dune. These roots act as a sand trap, catching sand in the roots and eventually helping to rebuild and stabilize the dune.Native animal species use the beach and dune ecosystem all year long as a source of shelter and food or as a nesting site during the summer. Resident animal species, such as beach mice, ghost crabs, sand fleas, raccoons and several species of birds have adapted to survive in the harsh heat and drought conditions all year long. Migratory species only use the beach during certain seasons. Three species of sea turtles regularly use Florida’s beaches as summer nesting habitat, while many species of shore birds use the beach as over-wintering habitat. 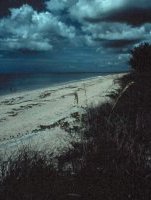 With an ever-changing environment, beach and dune species have adapted over time to specialized roles, connecting the survival of animal species with the survival of plant species and the condition of the habitat.Beach and dune systems, especially barrier islands, are active and are constantly being shaped by erosion (removal of sand from a beach), storms, accretion (addition of sand to a beach) and the natural drift of sand along the coast. Beach erosion and accretion are caused by ocean currents, wave action and changes in the sea level. Over the past century, a portion of Florida’s beaches have been lost due to a gradual one-foot increase in the sea level.

Longshore drift (the perpetual movement of sand along a coastline) and coastal winds constantly move sand along the shore, while storm events help build or erode the sand. During hurricanes and major storms, sand is removed from a beach and deposited off shore, forming sandbars. In contrast, the gentler waves shift the sand from the offshore sandbars back onto the beach. All of these forces interact to determine the slope, shape and size of a particular beach.

Once you learn about coastal habitats, take the Coastal Habitat Quiz!