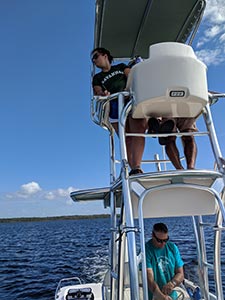 In 2018, Sea Turtle Conservancy began an in-water project to study the sea turtles of the Big Bend region of Florida. Historical, anecdotal and published accounts suggest the Big Bend region is an important developmental foraging ground forsea turtles. The region has a relatively low amount of coastal development and, remarkably, it contains the second largest seagrass estuary in the eastern Gulf of Mexico (about 3,000 km2). Large parts of this coastline have never been studied by sea turtle researchers. Estimating sea turtle population structure on foraging grounds is critical to measuring long-term trends, understanding the use of benthic habitats and managing protected areas. The Florida Panhandle and Big Bend regions contain important developmental habitats for many marine species, yet they generally receive less research attention than other areas of Florida.

This research is a collaborative project between STC, USGS Florida Cooperative Fish and Wildlife Research Unit, UF Department of Wildlife Ecology and Conservation, and the Nature Coast Biological Station in Cedar Key. Both STC staff and UF students are working and volunteering on this project. A key tool to this important work is a new “state the art” research vessel named the ‘R/V Lavinia.” The vessel was donated to STC from Carolina Skiff Boats and STC paid for the new engine and custom tower with funding from generous donors, Naked Turtle Rum and World Nomads.

The immediate goals of this project include describing the distribution of juvenile green turtles along this coastline, modelling the environmental factors that characterize high abundance sites, measuring green turtle diet and genetic structure, and determine their interseasonal and group movement patterns. Initial vessel surveys of the Big Bend in the fall of 2018 have covered 370 km and counted 108 sea turtles, including 83 green turtles, 13 Kemp’s ridleys, 11 loggerheads and one unknown species.

The Northwest Atlantic green turtle (Chelonia mydas) population is listed as threatened in the United States and federal wildlife managers have stressed the need for in-water abundance estimates and more information on the poorly understood juvenile neritic stage. Green turtles forage, nest and migrate in subtropical and tropical seas throughout the world. They have been depleted historically even though the species retains much of its former range. For many foraging areas, we lack basic information on the quality of the habitat, their seasonal movements and their foraging behavior. Effective management also requires quantifying the direct and indirect threats to this life stage, which include recreational fishing, boat strikes, disease and hypothermia. Although gathering this data can be difficult, recent tools such as small vessels with sighting towers and small Unmanned Aerial Systems offer an opportunity to survey for turtles over relatively large areas and capture them opportunistically.

In recent years, there has been an interest in modeling habitat factors that affect abundance. One important reason for this is to understand how species abundance changes due to habitat fragmentation and habitat loss either caused by humans or natural processes. Another is to simply understand the importance of certain habitats over others. Quantifying these relationships can lead to a greater understanding of habitat requirements, which is a task that is particularly important in the management and recovery of threatened and endangered species.

STC’s Florida in-water research project will identify previous unknown areas of sea turtle abundance in the northeastern Gulf of Mexico, which will give wildlife managers the ability to make informed conservation decisions and provide a baseline for future work. Vessel and sUAS surveys will be repeatable and allow comparisons across years and seasons. The identification of specific areas with higher abundance will help federal wildlife managers piece together a framework of critical habitat for use in future recovery plans for loggerhead, green and Kemp’s ridley sea turtles.