Common Name: Kemp’s ridley – named Kemp’s after Richard Kemp, who helped discover and study the turtle. No one is sure why it is called ridley, possibly due to having similar nesting behavior as the olive ridley.

Description: Head is moderate and triangular in size. Carapace is bony without ridges and has large, non-overlapping scutes (scales) present. Carapace has 5 lateral scutes and is very rounded. Front flippers have 1 claw, while the rear flipper has 1 or 2 claws. Adults have a dark grey green carapace with a white or yellowish plastron, while the hatchlings are jet black.

Diet: Have powerful jaws that help them to crush and grind crabs, clams, mussels, and shrimp. They also like to eat fish, sea urchins, squid and jellyfish.

Nesting: Kemp’s ridleys nest more often than other species, every 1 to 3 years on average. They also nest in mass synchronized nestings called arribadas (Spanish for “arrival”). Only the olive ridley also nests this way. Kemp’s ridley nest 2 – 3 times each season. They lay an average of 110 eggs in each nest and the eggs incubate for about 55 days.

Range: Adults are mostly limited to the Gulf of Mexico. Juveniles range between tropical and temperate coastal areas of the northwest Atlantic Ocean and can be found up and down the east coast of the United States.

Threats to Survival: The greatest threat to the Kemp’s ridley is from human use activities including collection of eggs and killing adults and juveniles for meat and other products. The significant decline in the number of Kemp’s ridley nests was a result of high levels of incidental take by shrimp trawlers. 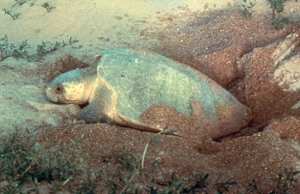 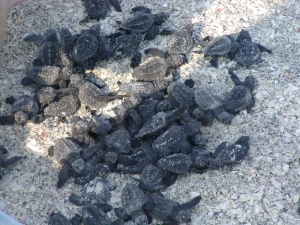