Information About Sea Turtles: Threats from Harvest for Consumption 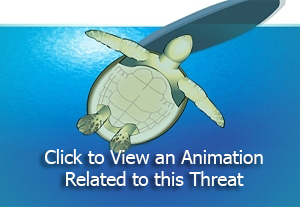 The Problem: Although sea turtles have spiritual or mythological importance in many cultures around the world, this has not prevented humans from consuming their eggs or meat. In many coastal communities, especially in Central America and Asia, sea turtles are considered a food source. During the nesting season, hunters comb the beaches at night looking for nesting females. Often, they will wait until the female has deposited her eggs to kill her. Then, they take both the eggs and meat. In some countries, sea turtle eggs are prized as an aphrodisiac. Others customarily consume sea turtle meat in observance of religious holidays. For example, in Mexico, thousands of inland residents journey to Pacific coastal communities during the week preceding Easter in search of sea turtles and other seafood. During this short period of time, as many as 5,000 turtles are consumed in this region alone. Until the 1970s when sea turtles were internationally recognized as endangered, their meat was also used to prepare turtle soup- considered a specialty by Europeans. Additionally, people may use other parts of the turtle for products, including the oil, cartilage, skin and shell.

Species Affected: The most commonly eaten sea turtle meat comes from the green sea turtle. However, loggerheads, ridleys, and occasionally hawksbills and leatherbacks are also consumed by humans in various regions around the world.

The Solution: In order to help combat the threat posed by human consumption, governments and conservationists have developed and tested several methods, including:
* Education;
* Patrolling nesting beaches;
* Relocating eggs to hatcheries (only in areas where no other soluntion will work);
* Ecotourism based on sea turtles;
* Government-imposed limits on consumption.

Case Study: Usually, a combination of these methods will achieve the most successful results. Evidence of this success can be seen in Tortuguero, Costa Rica – the largest green turtle nesting site in the Western Hemisphere. In this remote area, villagers were first educated about the importance of conserving these species and the threats that consumption poses to sea turtle survival. Alongside education, conservationists also settled in the area to conduct on-going research of this key green turtle population. Slowly, villagers began to realize that changing their economy from one of consumption to conservation would increase their economic potential through tourism. Today, Tortuguero is a model for other small communities and boasts a 400% increase in nesting green turtles.

* Sea Turtles—What Not To Eat