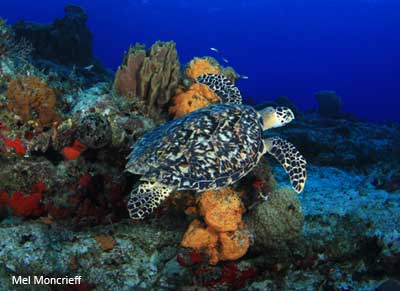 Numerous species of coral are found in worldwide. Each kind lives in a separate colony that is shaped differently from the others. The colonies take on the various hues of the algae that live within them – usually red, green, and brown.

Coral reefs are among the most biologically diverse ecosystems on earth. They are second only to tropical rain forests in the number of species they harbor and, indeed, are sometimes called “the rain forests of the sea.” Like their terrestrial counterparts, coral communities may contain valuable materials and medicines that may one day be useful to people. Coral reefs are home to many of the state’s most important fisheries resources, including spiny lobsters and groupers. Reefs also buffer coastal land from the damaging effects of storms and erosion and help to form the sandy beaches and quiet lagoons that are signatures of the state’s tourism industry.

Coral reefs today face an unintentional, but growing, threat from the very people who prize them most. Boaters frequently run aground or drop anchor on the coral heads, divers and snorkelers step on and bruise them, and pollution threatens to sully the clear waters that are vital to their survival.