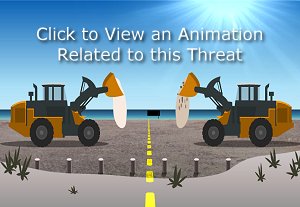 The Problem: One way to address beach erosion is through beach nourishment. Nourishment consists of pumping, trucking or otherwise depositing sand on a beach to replace what has been lost to erosion. While beach nourishment is often preferable to armoring, it can negatively impact sea turtles if the sand is too compacted for turtles to nest in or if the sand imported is drastically different from native beach sediments, thereby potentially affecting nest-site selection, digging behavior, incubation temperature and the moisture content of nests. If renourishment is allowed to proceed during nesting season, nests can also be buried far beneath the surface or run over by heavy machinery.

Dredging can also cause direct threats to sea turtles and their nearshore marine habitats. Hopper dredges that suck up the sand from offshore have been directly responsible for the incidental capture and death of many sea turtles in the US. Also if the sand is too fine or silty it can wash back out and cover near shore rocky bottom habitats that are used by many marine species and sea turtles.

However, when done correctly and in accordance with all laws to protect sea turtles and other natural resources, beach nourishment can add nesting habitat where erosion had washed it away. It is worth noting that a very wide beach resulting from nourishment is generally only beneficial to sea turtles in those areas where limited or degraded nesting habitat had previously existed.

Species Affected: All species of sea turtles are affected by beach nourishment and dredging.

The Solution: Current regulatory policies must change if there is any hope of saving natural beaches. These changes cannot take place the public’s help.

Case Study: A multi-year study of a four-mile long renourishment project in Martin County revealed much of what we now know about the impacts of beach nourishment to the nesting beach and sea turtle nesting. The study consisted of collecting extensive nesting data on the nesting beach before the nourishment project and comparing it with data after the project and with another beach that had not been nourished. The study concluded that there was a significant reduction in nesting success (turtles that come ashore and successfully nest) and an increase in false crawls in the year following the renourishment. Also a higher percentage of nests are laid closer to the water (since the new beach is so wide and flat) and are prone to being washed out during high tides and as the beach begins to naturally recede to a more normal configuration. Most of these negative impacts were greatly reduced in year two and by year three nesting returned to normal.