The Archie Carr National Wildlife Refuge was established by Congress in 1989 to protect sea turtles now threatened with extinction throughout the world. Leading sea turtle researchers and concerned citizens have watched with increasing concern as turtle populations worldwide have plummeted due to over-exploitation and destruction of nesting habitat. The Refuge offers hope for saving one of the most important sea turtle nesting sites in the world. 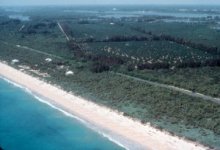 
Long stretches of quiet, undisturbed sandy beaches are essential to the survival of sea turtles. 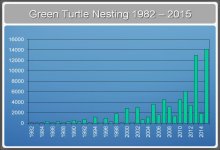 Refuge Nesting Trends
Nesting graphs based on nest surveys conducted in the Refuge. 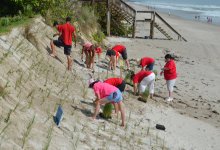 STC Helping the Refuge
STC has been an active supporter and advocate for Refuge from the start. 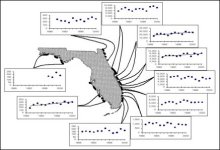 A National Wildlife Refuge at Risk

The Archie Carr Refuge represents the Nation’s most significant land acquisition effort to protect the world’s populations of marine turtles. Unfortunately, rapid coastal development in Brevard and Indian River Counties threatens the future effectiveness of the Refuge. Supporters of the Refuge are literally in a race against time to acquire the best remaining parcels of undeveloped land. Complicating matters is the scarcity of funds available for land acquisition, especially funding from the federal level.

Successful completion of the Archie Carr National Wildlife Refuge depends on funding for land acquisition efforts and wide public support for the Refuge. Since the dedication of the Refuge by Congress, the financial contributions of local and state governments and private, non-profit organizations has surpassed the federal commitment. Scientists, conservationists and land managers consider completion of the acquisition phase of the Refuge as the most essential step. For this to happen, Congress must be willing to dedicate more funding to the Archie Carr Refuge.