Description: Head is quite small. Carapace is bony without ridges and has large scutes (scales) present. Carapace has 6 or more lateral scutes and is nearly circular and smooth. Its body is deeper than the very similar Kemp’s Ridley sea turtle. Both the front and rear flippers have 1 or 2 visible claws. There is sometimes an extra claw on the front flippers. Juveniles are charcoal grey in color, while adults are a dark grey green. Hatchlings are black when wet with greenish sides.

Diet: Have powerful jaws that allow for an omnivore diet of crustaceans (such as shrimp & crabs), mollusks, tunicates, fish, crabs, and shrimp.

Habitat: Generally found in coastal bays and estuaries, but can be very oceanic over some parts of its range. They typically forage off shore in surface waters or dive to depths of 500 feet (150 m) to feed on bottom dwelling crustaceans.

Nesting: Nest every year in mass synchronized nestings called arribadas (Spanish for “arrival”). Only the Kemp’s ridley also nests this way. Nests 2 times each season. An average clutch size is over 110 eggs which require a 52 to 58 day incubation period.

Range: The olive ridley inhabits tropical and subtropical waters of the Pacific, Indian and Atlantic Oceans.

Status: U.S. – Listed as Threatened (likely to become endangered, in danger of extinction, within the foreseeable future) in 1978 under the U.S. Federal Endangered Species Act. International – Listed as Vulnerable (facing a high risk of extinction in the wild in the near future) by the International Union for Conservation of Nature and Natural Resources.

Threats to Survival: Direct harvest of adults and eggs, incidental capture in commercial fisheries and loss of nesting habitat are the main threats to this species. 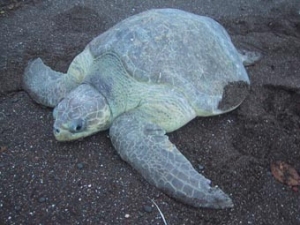 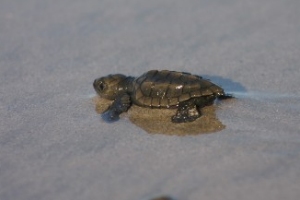