Description: Head has a single pair of prefrontal scales (scales in front of its eyes). Carapace is bony without ridges and has large, non-overlapping, scutes (scales) present with only 4 lateral scutes. Carapace is oval or round and body is very flat. Flippers have 1 claw. Edge of carapace is folded and covered by thin, non-overlapping waxy scutes. Carapace is olive-grey with pale brown/yellow tones on margins and the flippers creamy white. The scutes of the hatchlings form a unique dark-grey reticulate pattern, and the center of each scute is olive colored.

Nesting: Nests 4 times per season. Lays an average of 50 eggs at time, but these are comparatively quite large. The eggs incubate for about 55 days. When the hatchlings emerge, they are larger than most species.

Range: Very limited. It is found only in the waters around Australia and Papua New Guinea in the Pacific.

Status: Australia – Listed as Vulnerable under the Australian Environment Protection & Biodiversity Conservation Act. International – Listed as Data Deficient by the International Union for Conservation of Nature and Natural Resources. Was previously listed as vulnerable. Change in classification does not imply species recovery, it just indicates a lack of recent research into their abundance and distribution. 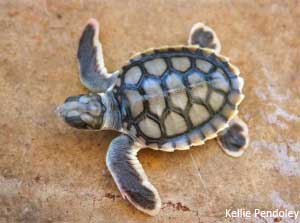