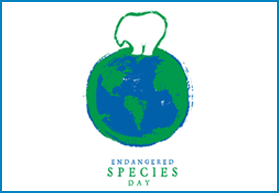 Endangered Species Day 2014 will continue to educate people about the importance of the species that are endangered and the things that can be done to help protect them.

Zoos, parks, gardens, wildlife refuges, museums, schools and community centers, amongst other participants in the U.S., will hold events to further promote, educate and celebrate Endangered Species Day and the reason for its creation. Those who are interested in participating in the celebration should visit endangeredspeciesday.org to find an event close to them.

The day is a great platform to highlight the success some species have achieved while recovering from being an endangered species. The green sea turtle is one of many species that are considered success stories because of its great recovery after actions were implemented to help enhance and protect the species.

All sea turtles in U.S. waters are listed under the Endangered Species Act and the green sea turtle is one of the many species that benefited from the act. Enacted in 1978, the act granted green sea turtles protection by NOAA Fisheries in the ocean and by the U.S. Fish and Wildlife Services (USFWS) in their beach nesting habitats along U.S. coasts.

The species was documented to have fewer than 50 turtles nesting at the Archie Carr National Wildlife Refuge on Florida’s east coast in 1990. In 2013 there were 13,000 nests. This incredible comeback is known as one of the greatest conservation success stories of our time.

Its success can be attributed to the Endangered Species Act, STC and all other supporters who worked tirelessly to ensure that the green sea turtles made its memorable comeback.

Although a lot of species have been delisted due to their recovery, there is still a lot of work to be done to help other species eliminate the risk of endangerment.

1. Learn about endangered species in your area.

2. Visit a national wildlife refuge, park or other open space.
These places are home to a lot of different species, and preserving an endangered species’ habitat is essential to protecting the species. You can help by visiting a refuge close to where you live and become a volunteer. The Archie Carr National Wildlife Refuge in Florida is a major safe haven for sea turtles. The refuge is where about 25% of all the sea turtle nesting in Florida occurs.

3. Make your home wildlife friendly.
Secure garbage in shelters or cans with locking lids and feed pets indoors to avoid attracting wild animals to your home. Taking these actions can keep animals like raccoons, which are sea turtle predators, away. Reduce your use of water in your home and garden so animals that live in or near water can have a better chance of survival. If you live on the beach you can make your home sea turtle friendly by implementing sea turtle lighting.

4. Plant native plants.
Native plants provide food and shelter for native animals. You can plant sea oats on the beach to help prevent dune erosion and provide habitat for sea turtle nesting. STC conducts native dune vegetation planting to provide an additional buffer to reduce or eliminate unwanted light on the beach and to enhance nesting habitat at various project sites in the Florida panhandle. 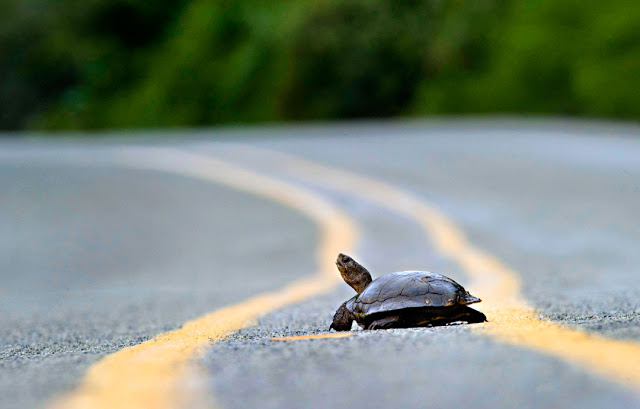 It’s important to watch out for wildlife, like this turtle trying to cross the road, while driving. Photo by Robin Loznak

6. Slow down when driving.
One of the main obstacles for wildlife in developed areas is roads. Animals that live in developed areas navigate in areas full of human hazards and roads present wildlife with a dangerous threat. So when you’re driving, slow down and be on the lookout for wildlife. You should also apply these practices while boating to avoid harming sea turtles and other endangered species in the water.

8. Never purchase products made from threatened or endangered species.
Overseas trips can be exciting and fun, and everyone wants a souvenir. But sometimes the souvenirs are made from species nearing extinction. Avoid supporting the market for illegal wildlife products such as tortoise-shell, ivory and coral. Hawksbill sea turtle shells are often used to be made into sunglasses, jewelry and other trinkets because of their beautiful shell pattern.

9. Stand up for wildlife.
Harassing wildlife is cruel and illegal. Harmful behavior such as disturbing and distracting sea turtles is illegal and can be reported by calling any of the numbers listed on our website.

Any effort to help an endangered species is appreciated, so participate and celebrate national Endangered Species Day on May 16, 2014!

Comments Off on Endangered Species Day