The Bermuda Turtle Project, a joint research and protection program of the Sea Turtle Conservancy (STC) and the Bermuda Zoological Society (BZS), is celebrating its 50th anniversary this year – making it by far the longest-continuous sea turtle conservation program that focuses on the animal in its marine environment. To celebrate the milestone, STC and BZS have produced a beautiful documentary about the program, and we are planning a series of events that will unfold over the course of 2018. Among these events will be the release of a special commemorative stamps series in Bermuda that celebrates the Bermuda Turtle Project (see below).

Currently overseas stamp purchases can be made by email to philatelic@gov.bm or to staylor@gov.bm

As we reflect on the Bermuda Turtle Project’s half century of work, it is appropriate to recall the roots of the program and draw attention to some of its many accomplishments so far. In the mid-1960s, Sea Turtle Conservancy (known then as the Caribbean Conservation Corporation) was carrying out its groundbreaking conservation program – Operation Green Turtle. The project was a unique conservation experiment set up by STC scientific founder Dr. Archie Carr and supported by the US Navy. The goal was to reestablish green turtle nesting colonies at beaches around the Caribbean where they had been wiped out to feed human demand for turtle meat. It was a bold and unprecedented conservation strategy, and it laid the groundwork for what would grow in to a global movement to protect sea turtles. 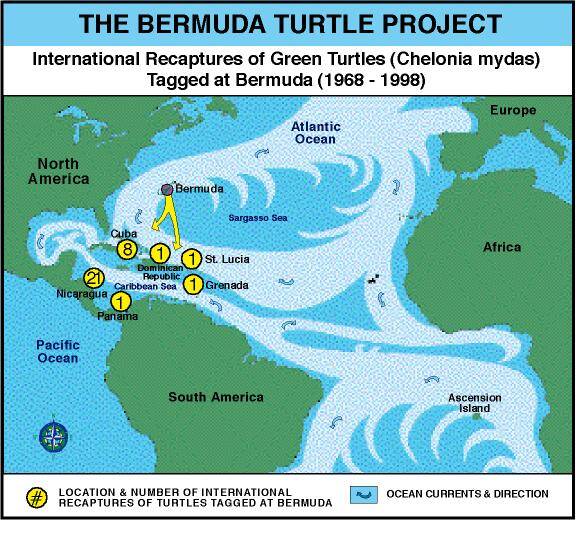 One of the places where little turtles were taken by the thousands for release was the tiny island nation of Bermuda. Caribbean in climate and appearance, Bermuda is actually almost due east of Cape Hatteras, North Carolina. Old sailors’ logs tell of great fleets of turtles in the waters around Bermuda as well as healthy nesting populations around the island. By 1620, the government was sufficiently concerned about the wanton exploitation of the turtle resource to pass “An Act Agaynst the Killing of Ouer Young Tortoyses,” which is the earliest known legislation regarding sea turtles anywhere in the world. Unfortunately, the law failed to halt the extirpation of the breeding colony, and by the 1920s nesting by green turtles had ceased on the island. Thus, by the time Dr. Carr and the STC had been formed in 1959, the nesting population had been entirely wiped out in Bermuda and only immature green turtles were found to inhabit the island’s extensive shallow-water habitats.

STC Board member and philanthropist Dr. Clay Frick, who owned a home in Bermuda (on what is now known as Frick Island) took a keen interest in the hatchling release program and in the little turtles found around the island. Dr. Frick and his family took up the cause to help recover Bermuda’s turtles, assisting STC with the hatchling shipments from Costa Rica and launching what is now known as the Bermuda Turtle Project (BTP). The BTP was formally initiated in 1968 by Dr. Frick, in cooperation with the Bermuda Government. Since 1991, the project has been a collaborative effort of STC, BZS and Drs. Anne and Peter Meylan. Throughout its history, the program has received financial support from the Frick family. Work carried out under the Bermuda Turtle Project falls into three main project activities: 1) Gathering data about Bermuda’s Sea Turtles; 2) Training Scientists; and 3) Public Education.

The research efforts of the BTP Project are focused on filling in the information gaps on green turtle biology so that successful protection may be given to these vanishing animals. Bermuda is one of a few locations worldwide where post-pelagic, immature green turtles occur in the complete absence of adults. It may be the best site in the world where green turtles of this age can be studied in their natural habitat. Whereas most studies of sea turtles take place on nesting beaches, Bermuda provides scientists and resource managers with a unique opportunity to study the little understood juvenile stage of the green turtle.

In addition to annual research, every year since 1996 the BTP has offered an in-water course on sea turtle biology and conservation. It brings students and scientists from around the world to Bermuda to study the pelagic and juvenile phases of the marine turtle life cycle, turtle biology and conservation through observation of the animals in their marine habitat, necropsies, and a capture-tag-release study. Click here to apply for this year’s course! 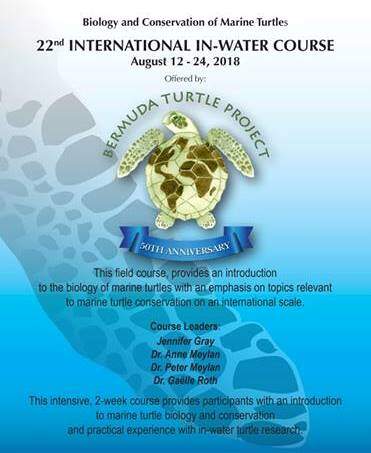 As of 2018, about 4,000 individual green turtles and 140 hawksbills have been captured by the project, tagged and released so that information can be obtained on size structure of the population, genetic identity, sex ratios, growth rates, site fidelity, and migratory patterns. More than 1,000 recaptures have been made of tagged green turtles by the project in Bermudian waters, providing one of the best data sets in the world on growth rates and movements of free-ranging, immature green turtles. Green turtles tagged in Bermuda have been captured as far away as Cuba, Nicaragua and Venezuela; the long-distance tag returns are particularly important because they shed light on the migrations of the green turtles that grow up in Bermuda waters.

A recently-completed genetic survey carried out as part of the Bermuda Turtle Project found that green turtles that grow up in Bermuda come from several nesting beaches, including Florida, Costa Rica and northern South America – many of the places where STC carries out systematic nesting beach monitoring and conservation projects for green turtles.

Satellite tracking has revealed important information about the use of home ranges by green turtles in Bermuda. They appear to utilize a particular spot near coral reef or rocks to sleep at night and then return to a main foraging ground during the day to graze on sea grasses. At a certain point in their maturity, they depart Bermuda waters, often following a bee-line route, to join an adult turtle colony, where they likely remain for the duration of their lives, aside from bi-annual migrations to their natal beaches (where they were born) to mate and nest.

Over the last half century, the Bermuda Turtle Project has discovered nearly everything that is known about the biology and life history of Bermuda’s sea turtles. In the process, the project has provided training for generations of sea turtle biologists and helped contribute to global sea turtle conservation efforts. The ongoing work to protect green turtles that reside in Bermuda during an important phase of their lives is helping recover this species in the Western Hemisphere. And STC’s sustained research and conservation programs in the US, Caribbean and Latin America have been credited with saving the Atlantic green turtle from near extinction and improving the survival outlook for many other turtle populations. We hope STC members and supporters will join us in celebrating the Bermuda Turtle Project’s 50th anniversary, and we invite you to watch our new documentary about the project, which is available above and online here: https://youtu.be/rbFLJ4z1tIk