STC Research Coordinator Writes about Her Experience Working in Tortuguero

Each nesting season, STC invites students and recent college graduates to assist with research at Tortuguero in Costa Rica. During this year’s leatherback nesting season, research assistant Maddie will be sharing her experience with STC’s members and supporters.

“¡Hola! Mi nombre es Madeleine Beange. I grew up in beautiful Vancouver, Canada. In 2009, I completed a B.S in neurobiology at McGill University. After a year of neuroscience research I got sick of killing mice.

I left my lab job to backpack Southeast Asia for a couple months. After a taste of wandering the world, I realized I needed more. Pursuing my dreams of working with sea turtles, I worked for 9 months and saved up enough money to fly to Costa Rica.

My fist experience with sea turtle conservation research was with PRETOMA, a Costa Rican NGO. From October to December 2011, I worked as a coordinator/research assistant for 3 months. 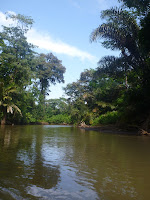 Next up is a 3 month research assistant position with Sea Turtle Conservancy. I will still be working in Costa Rica, but this time on the Caribbean side in Tortuguero.”

To read about Maddie’s adventures as a Sea Turtle Conservancy research assistant, click here for her blog, Mad About Sea Turtles.

Guest Post:: Sea Turtles of Costa Rica: Identifying Problems & What You Can Do To Help

More so than many other tropical locations throughout the world, Costa Rica is an important location for sea turtle nesting. But the five species that call the country’s two coasts home are being severely threatened by a number of dangers, pushing these creatures towards the point of extinction. We should all be aware of these threats and what we can do to help out so that we may preserve these species for centuries to come.

Costa Rica is amongst the world’s premier destinations to view nesting sea turtles. The species that are found in Costa Rica include the Hawksbill, Green, Black (a Pacific subpecies of green turtles), Olive Ridley, Loggerhead and the massive Leatherback sea turtle. Sea turtles are important to the health of the world’s oceans, and unfortunately six of the seven turtle species in the world are on the threatened or endangered list.

National parks have been put in place to help protect the most important nesting areas. Tortuguero National Park for instance is a breeding ground of four species of sea turtle. Two other turtle-inspired spots are located in the Guanacaste province. Ostional National Wildlife Refuge is located near the town of Nosara and is one of the world’s key breeding grounds of the olive ridley sea turtle. Las Baulas (Leatherback) National Park is near the picturesque beach of Playa Grande, which is a large Leatherback beach.

All of these species found in Costa Rica are either on the endangered or threatened list and all a number of dangers, including commercial fishing, egg poaching and both light and garbage pollution.

-Commercial fishing: Turtles are threatened by both long line and commercial fishing nets. Sea turtles like all reptiles breathe air. It is very common for a turtles to become entangled in nets or hooked in lines leading them to drown.

– Poaching: The fact is the local population enjoys the taste of sea turtle meat and uses turtle eggs as a supposed aphrodisiac. This leads to the hunting and harvesting of sea turtles and their eggs throughout. Restrictions have been put in place by the government and have helped reduced poaching, but these regulations are difficult to enforce.

– Light Pollution: Development of communities and commercial properties along nesting beaches has created light pollution that confuses and disorients the turtles and their hatchlings. Uneducated visitors are also a problem, as many go to the beaches looking for nesting turtles but are unaware that normal flashlights cause the same light problems as the developments. Red LED lights are the most eco-friendly way to view turtle nesting at night. The red light’s wavelength does not affect the turtles as much, allowing for successful nesting. It is always good policy to view nesting turtles with certified guides to ensure their safety.

– Garbage: There are many problems that result from humans polluting, but one of the direct threats to the leatherback species and other species is the presence of plastic bags. Plastic bags are easily mistaken for jelly fish, a staple in the leatherback diet. Plastic bag consumption leads to blockages the throat and digestive systems causing starvation and even death. Cigarette butts and oil droplets are also among the many hazardous items that do not belong in Earth’s oceans.

What you can do to help

Learning about sea turtles and not littering are some of the easiest thing you can do to help save not just Costa Rica’s sea turtles but the world’s oceans. If you have some free time and a big heart, you can also volunteer at one of many non-profits programs set in place to help sea turtle conservation. If we all help a little it will make a great difference.

To volunteer working with sea turtles in Costa Rica, visit www.conserveturtles.org to learn about our Eco-Volunteer Adventures.

Comments Off on Guest Post:: Sea Turtles of Costa Rica: Identifying Problems & What You Can Do To Help

At the end of September 2010, STC initiated the construction of a Education Kiosk in Tortuguero, Costa Rica. The building is constructed with concrete floor, a wooden frame and a traditional thatched roof made with the leaves of a local palm species known as the royal palm tree, Manicaria saccifera.

The goal this new facility is to offer a better learning experience for tourists and the Tortuguero Community. The Education Kiosk will feature an informative video, information panel displays and serve as a meeting facility for the local community.

STC was able to build this facility thanks to support from Tourism Cares and three French volunteers who dedicated a month of sweat and expertise.

— Update from the staff in Tortuguero, Costa Rica

Comments Off on Update on construction of new Educational Kiosk in Tortuguero, Costa Rica