The race has officially ended with high spirits and exhausted flippers! We want to extend a huge congratulations to our winner Lady Aurelia, who swam further than any other competitor in Tour de Turtles history! While she powered herself the 3,465 miles to victory, she was never alone as she had her amazing sponsors at the New England Cord Blood Bank (NECBB) by her side. Interestingly, NECBB chose the “outside the box” name, Lady Aurelia, to reflect their sponsorship, which does not quite “fit the norm” as they put it themselves. Indeed, without any direct ties to marine/tourism industry, NECBB was a unique sponsorship! CEO Joe Rizza said he hopes that their involvement in the Tour de Turtles will “encourage other companies and individuals to consider being a sponsor.” Sea Turtle Conservancy is extremely grateful for NECBB’s involvement and could not have agreed with them more when they said, “It was a great way to raise much needed funds and awareness for the excellent work the Conservancy does every day, for sea turtle conservation.” 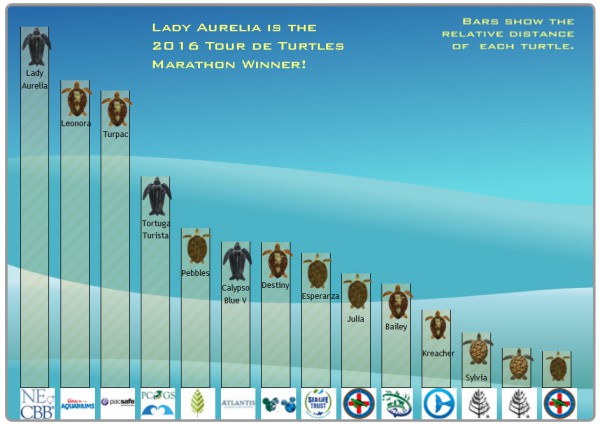 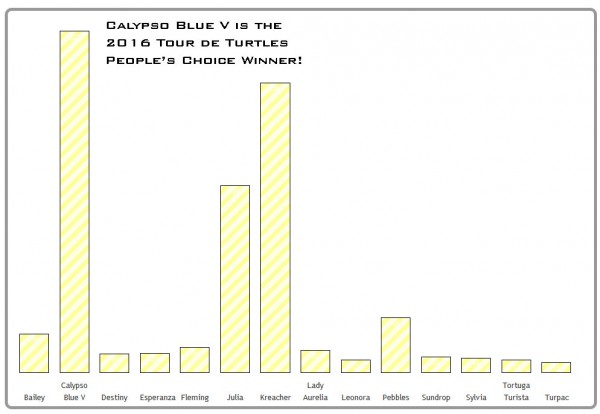 Although Lady Aurelia won in miles, we have another TDT competitor who won our hearts. And so, we are happy to announce Calypso Blue V as our 2016 People’s Choice Winner! Without the countless fans who donated and voiced their support, his victory and the tremendous progress of the other competing turtles, would not be possible. Sea Turtle Conservancy is so thankful for your support! Of course, behind every competitor is an organization that made their participation possible. Thank you to those at Atlantis for your involvement in Tour de Turtles! “Atlantis, Paradise Island is very proud to have worked with the Sea Turtle Conservancy over the last five years on Tour de Turtles” said Debra Erickson, Executive Director of the Atlantis Blue Project Foundation. “With all of the challenges that sea turtles face, Tour de Turtles provides a much-needed opportunity for school children and the public to learn more about sea turtles and how they can help save them.We are thrilled that we were able to share the adventures of Calypso Blue V with all of our supporters and that she won the People’s Choice Award.”

So, with an end to Tour de Turtles 2016, we want to express our gratitude once again for all the sponsors and individuals who supported the race and further, those who continually support our efforts! Sea turtle conservation is such an important cause for our world and your support does not go unnoticed.