Timing is everything. As the 2013 Tour de Turtles approached this summer, one juvenile green sea turtle was still left unsponsored.

It was late July, and Turtle & Hughes CEO Jayne Millard was visiting the Caribbean island of Nevis, coincidentally the very same weekend that Sea Turtle Conservancy (STC) was there for a Tour de Turtles event, hosted by turtle sponsor Four Seasons Resort. Millard happened to come across the event as it attracted many spectators to the beach outside her hotel. Intrigued, she decided to meet with STC’s Executive Director David Godfrey, where she learned that one turtle and one cause remained without a sponsor. After hearing that the remaining cause was “light pollution,” Millard knew that Turtle & Hughes would make a perfect match for the last sponsor spot.

Turtle & Hughes is a fourth generation family-owned business based in Linden, New Jersey and one of the nation’s largest electrical and industrial distributors. Established in 1923, the company partners with key manufacturers to serve the industrial, construction, commercial, electrical contracting, OEM, export and utility markets at 17 locations nationwide.

So, what does an electrical distributor have to do with sea turtles?

Other than its awesome name (named after one of its founders M. Berry Turtle) the turtle it chose to sponsor was swimming to raise awareness about “light pollution,” an issue that Turtle & Hughes felt it could have a hand in decreasing.

Light pollution is the interference of artificial lights along the beaches with sea turtle hatchlings. When sea turtles hatch, their instinct is to follow moonlight to help them find their way to the water. The artificial lights from commercial buildings, homes and streets can disorient hatchlings and lead them in the opposite direction, which often cause their demise.

Turtle & Hughes handles large lighting projects and has a separate division that performs energy-efficient lighting retrofits similar to those needed to protect sea turtles.  It decided to become a Tour de Turtles sponsor to advocate the need to change lighting systems along beaches.

“Turtle & Hughes joined the race to spread the word about sea turtle-friendly lights and fixtures,” Millard said. “In most cases, it’s easy and relatively inexpensive to install new lighting that shields the turtle’s nesting grounds.” 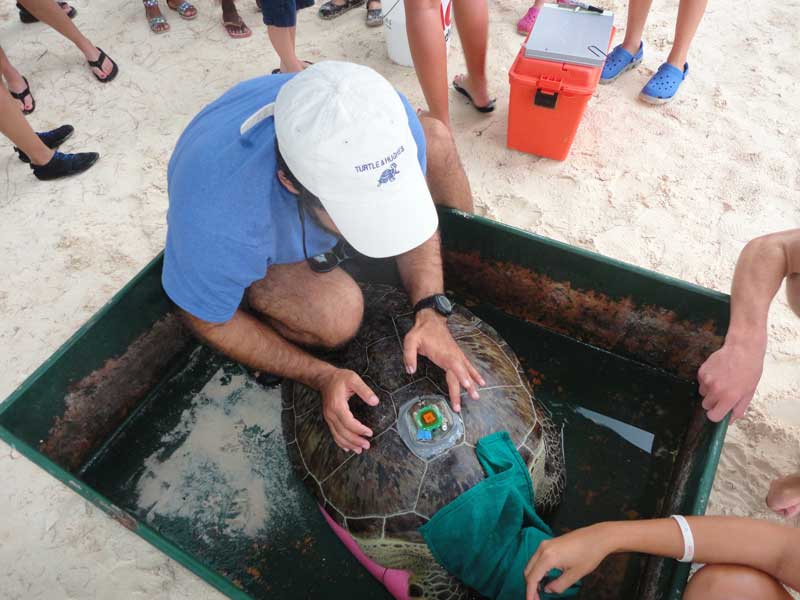 “Relay,” a juvenile green sea turtle that was satellite tagged on August 7, 2013 in Bermuda, became Turtle & Hughes’ sponsored sea turtle. He was named after the company’s mascot.

Relay swam a total of 30 miles by the end of the Tour de Turtles race and in addition to Turtle & Hughes’ generous sponsorship, raised over $400 for the lighting pollution cause.

“Sponsoring Relay was a great opportunity for us to support a worthy cause and become a strong industry advocate for change,” Millard said.

Aside from supporting the survival of the sea turtle, Turtle & Hughes is also working on the reconstruction of the World Trade Center area. Its services include providing Power Distribution Project Management Services for Tower One (Freedom Tower), Tower Four, World Trade Center Chiller Plant and the Transportation Hub.

Turtle & Hughes is celebrating its 90th year in business.  It continues a strong tradition of dedication to customers by providing best solutions. Its motto, “First in the Long Run,” embodies its culture of innovation, service, and heritage.

STC would like to thank Turtle & Hughes for its support in this year’s Tour de Turtles race!