**UPDATE 4/30/21 – Hope was encountered nesting again but unfortunately her new transmitter was no longer attached. It seems the attachment method failed or the transmitter came off while Hope was mating. However, we remain HOPEFUL that we will encounter Hope yet again and get one last try at satellite tracking her long-term. The scientific data she could provide would truly be invaluable!**

Hope was equipped with a satellite transmitter last May by researchers from the Sea Turtle Conservancy (STC) and Florida Leatherbacks, Inc. as part of STC’s annual Tour de Turtles “migration marathon” education program. The satellite transmitter allows the researchers and the public to track Hope’s location online and follow her migration. Hope was sponsored and named by Turtle & Hughes, Inc., a fourth generation family-owned business and one of the nation’s largest electrical and industrial distributors. 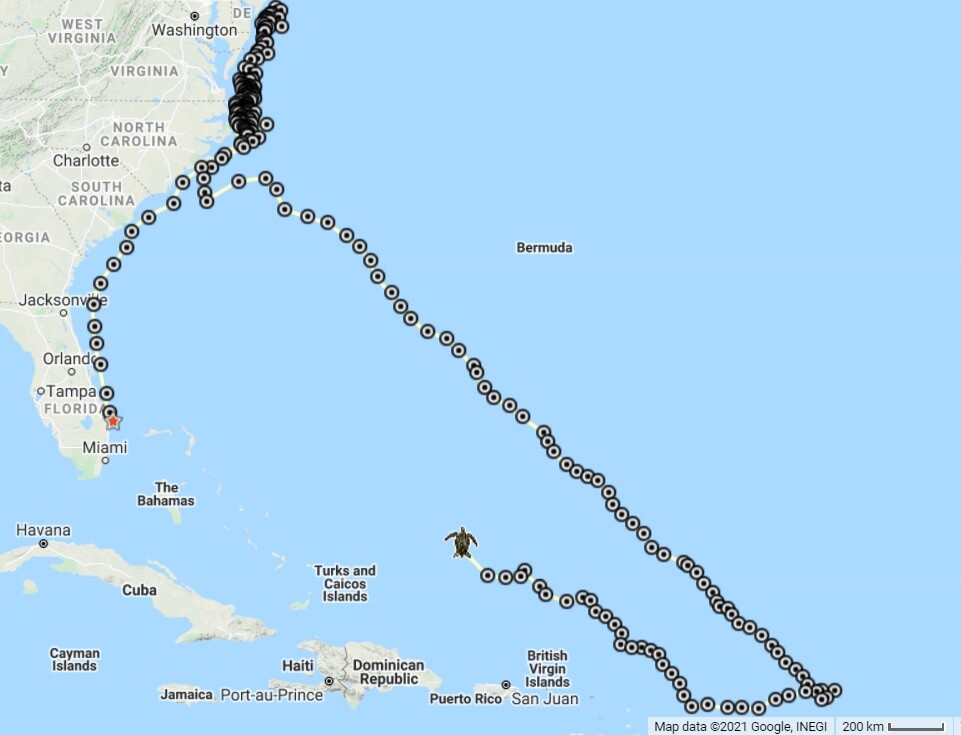 “Hope provides an incredible opportunity to track the same leatherback a second time from a nesting beach,” said Dr. Daniel Evans, STC Research Biologist. “She was an interesting turtle to follow in 2020, so we are excited and curious to see whether or not she follows her previous path.”

Hope developed a legion of dedicated fans who enjoyed checking her location online every day and following her incredibly unique track.

After transmitting for nearly nine months, Hope’s location stopped updating while she was located about 250 miles north of Puerto Rico. This can happen for a number of reasons—the tracking device may be damaged, have fallen off completely, or could be covered in biofouling which prevents it from sending a signal. Hope’s fans stood by hoping to see her signal come back online one day. Researchers were also hopeful she would start transmitting again, as her track indicated she may be returning to Florida, which would be an extremely unique event.

With no signal from Hope for almost two months, researchers from Florida Leatherbacks, Inc. were surprised when they came across a familiar turtle during their nightly track survey on March 29. It was Hope! It turns out, her satellite transmitter had fallen off, but they were able to identify her by her metal flipper tags and a PIT tag, or microchip. They were able to re-apply a satellite transmitter to continue tracking her, a very rare opportunity. 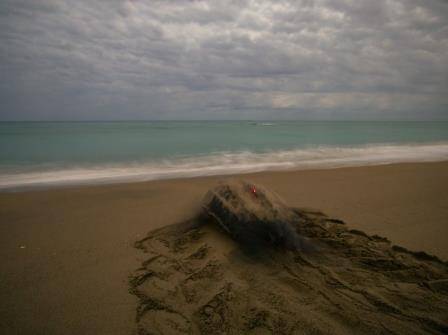 “We were incredibly excited and honestly quite shocked when the team found her again this year,” said Kelly Martin of Florida Leatherbacks Inc.” “We were even more thrilled that we had another satellite transmitter ready to go. This is the first time we have been able to track an endangered leatherback that has nested two years in a row and provides a very unique opportunity to look at behaviors that aren’t usually easy to track.”

As of Monday April 5, Hope is located about 30km east of the Ft. Pierce inlet in 128ft deep water. Since tagging last May, she has traveled more than 18,000 kilometers. The public can track Hope online at www.trackturtles.com/hope

**UPDATE 4/30/21 – Hope was encountered nesting again but unfortunately her new transmitter was no longer attached. It seems the attachment method failed or the transmitter came off while Hope was mating. However, we remain HOPEFUL that we will encounter Hope yet again and get one last try at satellite tracking her long-term. The scientific data she could provide would truly be invaluable!**