Kirsty, a juvenile green turtle tracked by satellite as part of the collaborative Bermuda Turtle Project (BTP), has flown the coop! After being fitted with a satellite transmitter and released in Bermuda in August 2014, Kirsty’s movements and habitat use were carefully tracked by BTP researchers Drs. Anne and Peter Meylan and Robert Hardy, with scores of STC members and supporters following the turtle’s movements online.

Kirsty, a juvenile green sea turtle being tracked by satellite as part of the Bermuda Turtle Project (BTP)

For months, the young turtle shuttled between positions in the nearshore sea grass beds of Somerset Long Bay, where it was originally tagged, and two locations located on the west side of the Bermuda Platform. But then Kirsty did something exciting!

STC and its BTP partners learned decades ago that Bermuda’s near-shore waters provide important developmental habitat for green turtles that originate from all over the Caribbean and Atlantic. No regular nesting of green turtles occurs anymore in Bermuda, yet its waters are filled with thousands of young green turtles that arrive when they are roughly the size of a Frisbee and leave the island shortly before reaching full adulthood.

When and how they leave Bermuda, and where they go, are important mysteries in the life cycle of green turtles. In an attempt to answer these questions, STC and its partners use satellite transmitters to track some of the larger green turtles captured each year as part of the in-water monitoring program.

On June 2, 2015, with researchers watching closely, Kirsty left the Bermuda Platform and began a long migration toward what will become her adult foraging grounds. Unfortunately, Kirsty’s transmitter quit sending signals just a week into her migration, though she appeared to be headed toward known foraging grounds off the south Florida coast. 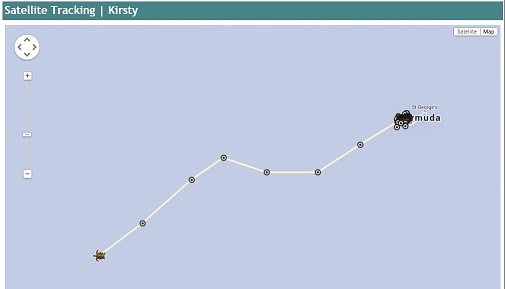 A map of Kirsty’s migration provided by her satellite transmitter

Kirsty was a big turtle (66.7 cm “Straight Carapace Length”) when measured last August, so it was not entirely unexpected that she might soon leave Bermuda. However, with scores of turtles having been tracked in Bermuda, only one other green turtle was observed by BTP researchers leaving the island.

“It was very exciting to track the start of Kirsty’s important habitat transition,” said STC Executive Director David Godfrey, “but for now her ultimate destination will remain a mystery.”

The BTP was initiated in 1968 by former STC Board Member Dr. H. Clay Frick II, in cooperation with the Bermuda Government. Since 1991, the project has been a collaborative effort of STC, the Bermuda Aquarium and Zoological Society and Drs. Peter and Anne Meylan. The research efforts of the BTP Project are focused on filling in the information gaps on green turtle biology so that successful protection may be given to these amazing animals.

Kirsty after being outfitted with a satellite transmitter

In addition to annual research, every year since 1996 the BTP has offered an international in-water course on sea turtle biology and conservation. It brings students and scientists from around the world to Bermuda to study the pelagic and juvenile phases of the marine turtle life cycle, turtle biology and conservation through observation of the animals in their marine habitat, necropsies, and a capture-tag-release study.

This year’s course, to be held in August, will be led in part by STC Scientific Director Dr. Emma Harrison. This summer, STC also will host a group of Board members and donors on an exploratory trip to observe and participate in the Bermuda turtle research program.