Sea Turtle Conservancy (STC) is excited to have our friends at Atlantis, Paradise Island sponsor a turtle in this year’s Tour de Turtles for the fourth year in a row! The turtles they sponsored the last two years, Calypso Blue I and Calypso Blue II, won their respective marathons and traveled over 6,400 miles both years. Atlantis is hoping the streak will continue this year with its turtle, leatherback Calypso Blue III.

The lucky name originated from a Facebook naming contest. Debra Erickson, executive director of the Atlantis Blue Project Foundation, said if Calypso Blue III wins this year “it would be like winning the Triple Crown.”

Atlantis is a resort and water park in The Bahamas that is celebrating its 20th anniversary this year. It encompasses 14 lagoons and eight million gallons of salt water that contain more than 50,000 aquatic animals as well as caves, coral formations and underwater ruins that showcase many types of marine life from sea turtles and sharks to manta rays and moray eels.

Atlantis uses its vast collection for education and conservation efforts through the Atlantis Blue Project. “The Atlantis Blue Project started over seven years ago with the goal of using scientific research, education and public outreach to help protect our oceans,” Erickson said. “The project’s focus today is saving sea species and their habitats throughout The Bahamas and the Caribbean seas.”

Atlantis’ involvement in Tour de Turtles is part of that conservation effort.

Erickson said that after 15 years of sea turtle display, breeding and conservation, Atlantis began to look for a way to expand its sea turtle conservation efforts through both research and public education and communications.

It was determined that Tour de Turtles was the perfect program to reach those goals, according to Erickson, because it “enables scientists to collect invaluable data on sea turtle migration while at the same time educating the public on the challenges that sea turtles face from ocean debris to boat strikes.”

Atlantis has continued to sponsor a turtle in the marathon for the past four years because of the program’s high level of engagement, Erickson said. It enables many individuals to follow sea turtles’ migration on a daily basis and spread the information through social media as well as allowing scientists to use the data collected to better understand and manage sea turtle species. 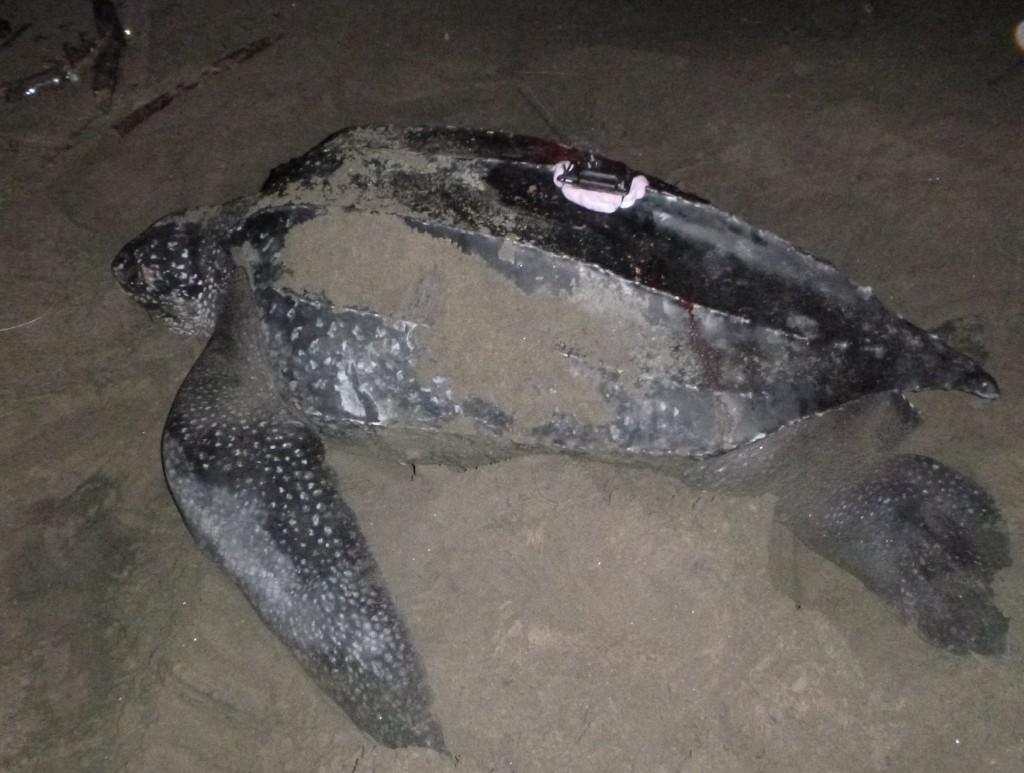 Calypso Blue III was released on May 27, 2014 from Sorpota Beach, Panama.

Erickson said, “We are looking forward to this year’s Tour de Turtles and seeing the results at the end of the race. The program allows Atlantis to continue its commitment to sea turtle conservation and gives us an opportunity to engage our guests and involve them in helping to preserve sea turtles.”

In addition to Tour de Turtles, Atlantis actively participates in other sea turtle conservation efforts. Each year, Atlantis’ Aquarists collect over 1,200 eggs laid by female turtles on its beach, place the eggs in replica nests at its Fish Hospital and release the young out on the beach once they hatch.

STC would like to thank Atlantis for its constant support! We can’t wait to see if Calypso Blue III carries on the winning streak.