Apply to be a Research Assistant with STC in Tortuguero

Between eight and sixteen Research Assistants (RAs) will be trained in sea turtle monitoring techniques by, and work under the supervision of, the STC Field Research Coordinator. The RAs main responsibilities include nightly tagging, track surveys, nest monitoring and excavation. RAs are responsible for tagging nesting turtles, collecting biometric data from females, recording nesting activity during track surveys, and other pertinent data collection. RA positions are voluntary and selected RAs will receive board and lodging at the STC Field Station for the duration of their time working for STC in Tortuguero.

STC Alumni RAs have gone on to work for respected conservation organizations, universities and government agencies worldwide. Or like previous RA Ralph Pace, they continue their work with STC. Ralph was an RA in 2010 and then took on the role of STC Field Research Coordinator in 2013. Ralph is also a talented photographer. Below are some exciting details and photos from his time spent in Tortuguero with STC:

“When I took the position here as the Field Research Coordinator in Tortuguero, Costa Rica I knew fully what I was getting into. Having spent three months here as a Research Assistant for half of the green turtle season in 2010, I was well aware of the wild adventure and surprise that Tortuguero would provide. When most people hear I am working on a Caribbean beach in Costa Rica they envision a white sand beach where luxurious tiki style huts hang over crystal clear water. But, here it is far more rustic and wild. Imagine Jungle Book meets Indiana Jones.  In reality, Tortuguero is a highly dynamic beach who’s landscape changes as fast as the tide.  The beach is backed by a lush, dense jungle that is supported by the migration of sea turtles.

Under the clearest of Milky Way skies, we set out to patrol the beach nightly in search of three to four hundred pound nesting female turtles. We do so to collect data and monitor their epic population rebound of 500% here in Tortuguero.  Then as quickly as the turtles appear they vanish on their return to far off feeding ground around the Caribbean.

An RA measures a nesting sea turtle at night. (Photo by Ralph Pace)

The beach becomes an expressway for millions of babies who are only just beginning their majestic journey. Just this morning during a track survey, I stood in shock as six hundred hatchlings emerged under the hardest of rains. As the baby hatchlings entered the water I couldn’t help but wonder where the offshore currents will take them. Will they go to Bermuda, Brazil or Cuba as many of our turtles do? Or, will they settle closer to home in Nicaragua? (Click here to watch an amazing video Ralph shot of green sea turtles hatching!) 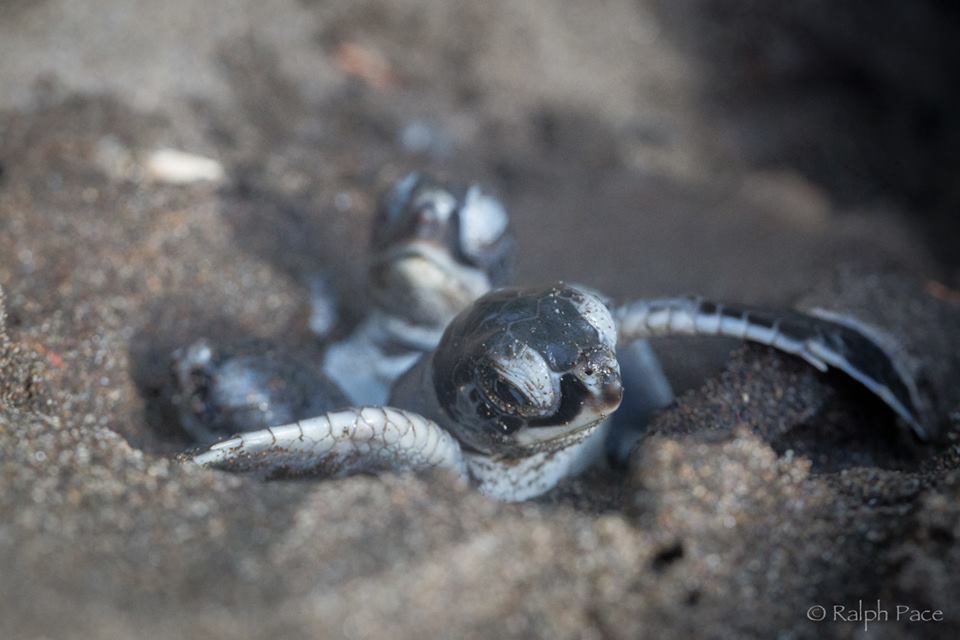 As with all the other mysteries, I wonder, where have six months gone? Then I remember the thousands of turtles I have seen, hundreds of hours on the beach, the dozen meteor showers, the manatee I took DNA samples of, the jaguar I stood face to face with, the daily howler monkey alarm clocks at 5 am, the hundreds of kids served in the local schools and the countless friends I’ve met from around the world that have made it all so epic. So what makes this place so special?  Of the five continents I have explored, the mystique and adventure of Tortuguero is like no other place I have ever seen or imagined.”

For more information about STC’s Research Assistant positions including a project summary and work description, click here. The deadline to apply for the Leatherback Research Program is January 7, 2014 and the Green Turtle Program deadline is March 10, 2014. For questions pertaining to STC’s Research Assistant Program, please contact STC Scientific Director Emma Harrison at emma@conserveturtles.org.