Policy Initiatives: International Issues: Bahamas: Why should Clifton be a Conservation Area?

We are concerned that the Clifton Cay Project will result in yet another example of the chipping away at critical sea turtle habitat by harming the world famous reef system and sea grass beds just offshore of the project. The biodiversity of this marine environment rivals that found anywhere else in the Bahamas or the Caribbean.

While sea turtles may have once nested on the beaches in the area, there currently is no record of nesting activity. However, green, hawksbill, and giant loggerhead turtles are seen in abundance throughout the near shore reefs and sea grass beds. Green turtles are vegetarian and rely on sea grass beds as a food source. Researchers estimate that green turtle populations in the Caribbean have declined by at least 99% since the arrival of Columbus!! Hawksbills and loggerheads forage on the rich diversity of sea life found among the reefs. The hawksbills are now listed as “critically endangered” throughout the Caribbean and their chances for long term survival are bleak.

Here in the U.S., especially in Florida, government agencies and private organizations are spending millions to protect sea turtles and their nesting habitats. But sea turtles spend 90% of their lives in distant marine habitats, which means the protection of these important marine resources is essential to the turtles’ long term survival. Research using satellite telemetry to track the migratory patterns of sea turtles reveals that Florida’s nesting populations of both loggerheads and green turtles regularly travel to the Bahamas after nesting on our beaches. Therefore, what happens in the Bahamas directly affects U.S. sea turtle populations. For an example of the routes these turtles take, check out the migration route of Francis, which allows you to see the wide ranging movements of these turtles and their reliance on habitats throughout the Caribbean.

The proposed development of 637 home sites calls for an extensive canal system to be dug through the peninsula’s limestone to allow lot owners direct ocean access. The canals, which literally will cut the peninsula in half, and the associated marina, will flush directly into the nearshore habitat causing silt, sand, oil, gas and other residential runoff to directly impact the surrounding reefs and seagrass beds. Increased boat traffic will also pose a very significant threat.

Last year the Bahamian government hired a prominent Florida engineering firm to conduct an evaluation of the “Environmental Impact Assessment (EIA)” provided by the developers. The engineering consultants reported that, “Of most concern was the potential impact on the coral reef resources that fringe the end of New Providence Island. The EIA significantly lacks the detail to assess the environmental impacts of the Clifton Cay development.” The report concluded with ,”In its present form, the proposed development does not adequately protect these marine and shoreline natural resources.”

“Clifton,” at the westernmost tip of New Providence, harbors a surprising array of natural and cultural resources on this small island that is otherwise highly developed. The aesthetic appeal of the area’s marine and coastal scenery is so stunning that several major motion pictures have been filmed in the area, including the recent “Flipper” release, “Jaws IV” and various James Bond films. Some of the most attractive natural features of the region include the dynamic rock and sand shoreline and the vibrant nearshore reef systems.

Of the numerous reefs, deep ocean walls and wrecks that comprise the world-class dive sites around the island, the majority are located just off Clifton and are the mainstay of the $18-million Bahamian dive industry. Most visitors to New Providence who go on diving excursions are taken to explore the fabulous marine sites within easy view of the Clifton Bluffs. 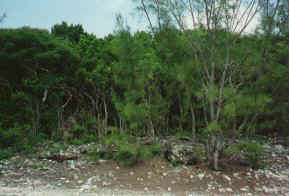 Pine groves, coppice forests (tropical hardwood hammocks) and wetlands provide vital habitat for birds, including migratory species that are currently threatened by habitat loss throughout their ranges. Natural underground aquifers store millions of gallons of fresh water at the site. 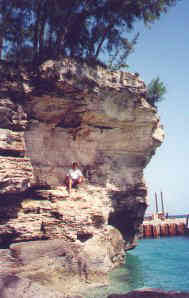 The limestone cliffs, shoreline and woods are peppered with important historic and archeological remnants. Many building and wall ruins remain from the 19th Century Whylly Plantation, once the home of a progressive public official who later freed his slaves and gave them the land when he departed New Providence. Older farm ruins from the 18th Century may be the oldest-known building in the Bahamas.

There is also significant evidence of Lucayan occupation of the site, artifacts left by the ancient peoples who colonized the Bahamas as early as 500-600AD and were there to make contact with Columbus when he arrived in the New World. Archeologists have indicated that Clifton may be the only site in the Bahamas where there are representations from all the significant eras of human occupation preserved on one piece of property. More information about the archaeology at Clifton.