It’s a Jungle Out There: Sea Turtles and Jaguars Interact in Tortuguero National Park

It’s a Jungle Out There: Sea Turtles and Jaguars Interact in Tortuguero National Park

Editor’s Note: Since the late 1990s, Sea Turtle Conservancy researchers in Tortuguero, Costa Rica, have been documenting a steady increase in the number of nesting green turtles preyed upon by jaguars. Not surprisingly, the number of direct jaguar sightings by STC personnel walking the beach also has increased over this time period. Despite this somewhat concerning trend, the number of turtles killed each year by jaguars is quite small in proportion to the size of the nesting colony, and the loss from predation, so far, has only a negligible impact on recovery efforts for Tortuguero’s green turtles. Meanwhile, there is growing evidence that Tortuguero’s turtle population plays a major role in the survival, health and unique behavior of an important population of jaguars. In order to gain a better understanding about the jaguars found in Tortuguero, researchers with Coastal Jaguar Conservation initiated a project to coordinate monitoring of the population. STC invited the group to submit a guest article to the Velador to update our readers about what they have learned so far, and STC is working to build a collaborative relationship with the group in order to contribute to the project’s goals. 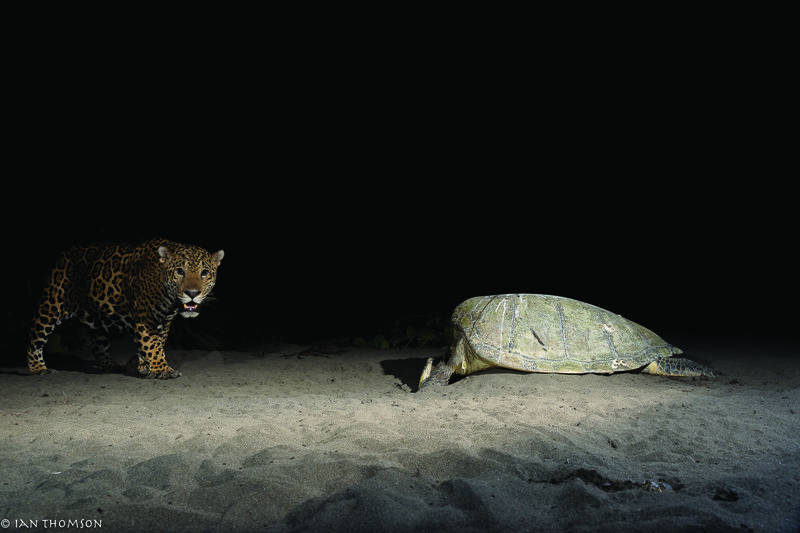 In 2011, Master’s degree student Stephanny Arroyo Arce came to Tortuguero National Park, Costa Rica to build upon the existing jaguar monitoring project established by Global Vision International (GVI) in 2005. This collaboration forms the basis of what would become Coastal Jaguar Conservation project (CJC) in 2014, which is currently managed by Stephanny and ecologist Ian Thomson.

One of the main goals of the project is to better understand the predator-prey interaction between the jaguar (Panthera onca) and the four species of sea turtles that nest in Tortuguero-green turtle (Chelonia mydas), leatherback (Dermochelys coriacea), hawksbill (Eretmochelys imbricata) and loggerhead (Caretta caretta).

As numbers of predation events increased year after year, it became evident that the local jaguar population was adapting and thriving due to the near year-round levels of readily available prey (in the form of sea turtles). The high availability of prey provided this elusive feline with a perfect habitat, and made Tortuguero a suitable home for both a resident and migratory population of jaguars—as well as making it a suitable site for breeding and raising young.

The high prey availability has allowed the project to study the social structure of jaguars, a species that has always been considered a solitary carnivore. Due to the cryptic nature of the jaguar throughout its geographic range, this kind of information is extremely hard to document, but the unique characteristics of Tortuguero (e.g. aggregate prey distribution in a small area) have facilitated the documentation of rare and atypical behaviours in this feline (e.g. a faculty for scavenging, smaller territories with greater overlap between individuals, display of nursing behaviour), some of which have never been documented in the wild before.

Due to the importance of Tortuguero National Park (TNP) for the conservation of the jaguar, this project is working with the local government, local communities and other conservation organizations to support the protection of this unique area, which will be essential for the long-term survival of both the jaguars and Tortuguero’s sea turtles.
Thanks to these efforts, one of the main Thanks Thanks to these efforts, one of the main achievements has been the recent extension of the
“Absolute Protection Zone” within TNP by the Costa Rican government (ACTo-SINAC), which aims to regulate human presence to ensure protection of the natural habitat of jaguars for future generations.