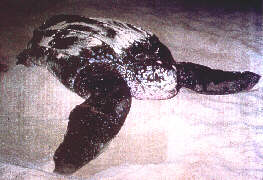 The second year of operations at Caribbean Conservation’s newly constructed John H. Phipps Biological Field Station in Tortuguero, Costa Rica, saw the completion of the second season of leatherback monitoring in addition to the ongoing green turtle monitoring program. The facility, readied by staff and volunteers, accommodated the program participants as well as study groups from a variety of institutions. Also, the H.Clay Frick Visitors Center provided interpretive and educational services to thousands of Tortuguero travelers.

Leatherback Season Comes to a Close

The first two years of the leatherback monitoring program found that nesting and egg poaching are more extensive on Tortuguero beach than previously realized. This year 23 nests were destroyed by poachers. During the 1995 season the majority of the eggs laid in areas near the Tortuguero village and at the southern extreme of the beach between Jalova and Parismina were taken by poachers. The new leatherback program findings indicate the need for additional protection and conservation of this important leatherback rookery. Park personnel are aware of the problem but do not have enough staff to adequately protect the entire 22-mile beach.

A total of 1,361 turtle tracks were recorded on the beach during the 1996 leatherback season. Researchers estimated that 1,060 of the tracks were made by leatherbacks. The remaining tracks were divided among three other species including 246 green, 33 hawksbill and 22 loggerhead.

Seven research assistants were trained to carry out the program and 15 participants helped to monitor the beach.

The 1995 leatherback program, under the direction of Cathi Campbell, and with assistance from Cynthia Lagueux, got underway on March 31 and was completed on May 11, 1995. Campbell and Lagueux, with assistance from CCC’s Scientific Director Dr. Jeanne Mortimer, developed the program’s methodology, trained six research assistants to carry out the program, and along with the help from eight participants, monitored the entire 22-mile beach for nesting leatherbacks.

Based on the 16 track surveys of the 22-mile beach conducted during the program, it is estimated that approximately 747 leatherback and 234 green turtle nesting emergences occurred between April 8 and May 11. Most leatherback activity occurred on the southern portion of the beach between mile 13 4/8 and mile 20. Green turtle activity, in contrast, is heaviest between mile 8 4/8 and mile 11 4/8. Leatherback nesting emergences occurred primarily from April 8-23 and declined noticeably afterwards.

1996 Green Turtle Program. Researchers are on the last leg of the 1996 green turtle season, which is under the direction of Dr. Roldan Valverde. To date about 1,700 turtles have been tagged, including green, hawksbill and leatherbacks. Researchers reported seeing two mating pairs of green turtles on the beach, which is very rare. They also encountered a turtle that had been tagged in Cuba and have contacted Cuban offi-cials to learn more. Hatchlings have begun coming up from their nests on the beach in low numbers. So far, leatherback, hawksbill and green turtle hatchlings have been seen.

As in the leatherback program, poaching has been a problem throughout the season. An average of two turtles may have been taken a night from the area of the beach closest to the Tortuguero village. However, now that lobsters have come into season in Tortuguero, the pressure on turtles seems to have decreased. A full report on the 1996 green turtle season will be printed in a future issue of the Velador.

1995 Green Turtle Program. Carlos Roberto Hasbún, former director of the National Park Service of El Salvador, directed the green turtle program from July 7 to September 2, 1995. Eleven Research Assistants and 47 participants assisted with the monitoring, environmental education activities and community integration projects during the two-month program. Until 1995, the program focused exclusively on the 22 miles of beach between the Tortuguero and Parismina river mouths. During the 1995 season, several track surveys were conducted along the beaches to the north and south as well. Tracks were found on both stretches, with evidence of turtle poaching on the beach south of the Parismina river mouth.

The peak number of nesting emergences appears to have been reached at the end of August just as the program was ending, which suggested the need to conduct future programs well into September and October. The teams tagged 1,156 new turtles and encountered 270 turtles tagged in previous years. Of the tagged turtles, 166 were encountered re-nesting during the program. As is normally the case, most of the nesting activity occurred within a few miles of mile 9 and nesting activity was depressed near mile 3 1/8 which is the site of the village. Undoubtedly the lighting and past poaching pressure has caused a decline in nesting there. A small percentage of turtles (less than 3%) were found to have the tumor like growths called fibro-papillomas.

Considerable illegal turtle hunting activity was observed inside the 12-kilometer limit offshore. The park ser-vice captured five vessels poaching tur-tles and released 60 harpooned adults. Another four poachers were captured on the beach and seven turtles released. A legal turtle harvest of 2,700 turtles by Limón fishermen continues but local and international pressure to stop this practice is growing, since the local market for turtle meat is non-essential and diminishing in the area.

The old CCC green turtle field station, affectionately known as “Casa Verde” (green house), was taken down in late 1995. Built in the 1940’s for surveyors of the United Fruit banana company, it was acquired by the CCC in 1963. For 30 years, Casa Verde housed scientists, students, volunteers, and monitoring program participants whose work resulted in over 100 published scientific studies on sea turtles as well as other aspects of the Tortuguero flora and fauna. More than 80 natural resource managers from 25 nations received training here in sea turtle biology and conservation.

Although Casa Verde guests and CCC staff struggled for years to stem the rot and decay inflicted on the structure by the unrelenting dampness and heat of the humid tropics, in the end the termites won. Too deteriorated to restore, Casa Verde was dismantled by then station manager Randy Leavitt with help from several villagers. The serviceable wood, electrical and plum-bing materials and the corrugated roof panels were donated to the Tortuguero Village Development Association for use in repairing the primary school.

Casa Verde is registered as a Costa Rican historical site and many lament its passing. CCC plans to raise funds to reconstruct Casa Verde, and in an agreement with the Tortuguero Conservation Area, use it as a station for the national park guards and an interpretive site for visitors.

Randy Leavitt managed the Tortu-guero field station until December 1995, his final duties involving the breaking in of new station manager Eddy Rankin. Eddy, born and raised in Tortuguero, is the son of Durham Rankin, one of Tortuguero’s founders who collaborated with Dr. Ar-chie Carr and the CCC for decades studying the area’s sea turtles. Durham Rankin passed away last year, but Eddy and his brother Alonso have both con-tinued their father’s tradition of cooperation with the CCC’s turtle programs.