GAINESVILLE, FLORIDA – More than 400 marine turtle scientists and over 100 marine turtle conservation groups from around the globe called on the United Nations to enact a moratorium on pelagic longline and gillnet fishing in the Pacific to protect endangered sea turtles and other marine species. The call to halt these dangerous types of industrial fishing was made at the annual American Association for the Advancement of Science conference held in Denver. Longlining and gillnetting are major factors in the decline of the Pacific leatherback, which is predicted to go extinct in ten years if immediate action is not taken. Copy of letter sent by over marine turtle conservation groups (pdf file). 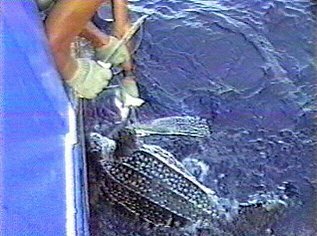 Scientists and conservation groups sounded the call to alert governments and fisheries managers in the United States and abroad to the worsening crisis of our global fisheries and the rapid decline of the Pacific leatherback sea turtle. Incidental capture in longline fishing is considered a major threat to the long term survival of the Pacific Ocean population of the leatherback sea turtle. A recent report to the Pew Charitable Trusts estimates that there are almost 2 billion hooks set per year by the longline fishing fleet.

It appears this year’s return of nesting leatherback to Pacific beaches was the worst on record. Scientists estimate that there are now less than 5,000 nesting female leatherback left in the Pacific Ocean down from 91,000 in 1980, a decline of 95%.

Last year, the U.S. has taken important steps to protect embattled marine species by closing the West Coast to longlining altogether and restricting the Hawaii longlining fleet from fishing for swordfish. Just as the United Nations passed a comprehensive global ban of driftnet fishing in the early 1990’s, scientists and environmental organizations are pressing them to follow the lead of the United States by placing a moratorium on both longlining and gillnetting throughout the Pacific.

Thanks to the Sea Turtle Restoration Project for background information!