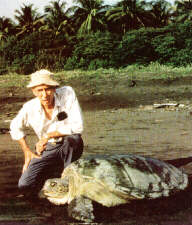 SAN JOSÉ, COSTA RICA — Sea turtle conservation works! At least it does at the green turtle nesting beach in Tortuguero, Costa Rica, where researchers from Caribbean Conservation Corporation (CCC) found nesting of the endangered turtle species has increased by an impressive 417% since 1971.

Centuries of hunting for meat and eggs reduced global green turtle populations to a point where the species is considered endangered. At Tortuguero, however, the nonprofit CCC conducts one of the longest continuous conservation Programs in the world. Initiated by Dr. Archie Carr in the 1950s, the Program continues under the direction of CCC, in cooperation with the Costa Rican Ministry of Environment and the community of Tortuguero.

A recent analysis of Tortuguero’s sea turtle population, published this month in the scientific journal Biological Conservation, which is based on four decades of nest census surveys conducted by CCC researchers along the 18-mile nesting beach, suggests a green turtle recovery is underway in Costa Rica. During the last five years, an average of 104,411 green turtles nests have been deposited at Tortuguero each year by green turtles. The nesting population is one of the two largest remaining green turtle rookeries in the world.

CCC researchers say the nesting increase is at least partly due to pioneering conservation efforts in Costa Rica. Since sea turtle conservation was initiated in Tortuguero, the area has been declared a National Park; green turtle hunting and egg collection have been banned; and Costa Rica passed regulations against harming sea turtles. Green turtle nesting is now a major attraction in Costa Rica. Tourism to observe nesting turtles is the predominant economic activity in Tortuguero. Local villagers have found that green turtles generate far more money through tourism than through hunting for meat and eggs. Unfortunately, threats to green turtle survival persist in many places.

“Tortuguero’s green turtles are still hunted extensively on their feeding grounds in Nicaragua,” says Sebastian Troëng, CCC’s Scientific Director and lead author of the study. “Due to the slow maturity of sea turtles, the full impact of the Nicaraguan fishery may not be seen in Tortuguero for years. Green turtles are a shared resource and must be managed through international cooperation. Our findings show that long-term conservation works and that economic benefits from sea turtle tourism can be greater than those derived from turtle hunting.”

###
High quality images can be found in our online Press Room: http://media.conserveturtles.org