Photo of Havana by Andrea Holbrook

For the first time ever, STC is partnering with the Cuba Marine Research and Conservation Program, The Ocean Foundation and Holbrook Travel to offer a Sea Turtle and Cultural Expedition to Cuba from September 4th-12th, 2015. Deadline to sign up in July 1st!

Participants will visit Havana, the Guanahacabibes Peninsula and Vinales over the course of the expedition. CLICK HERE TO VIEW THE OFFICIAL ITINERARY.

Participants will have the opportunity to look for turtles coming ashore on the beaches of the Guanahacabibes Peninsula and observe the nesting process.

The group will return to a turtle nesting beach the following day to document any tracks from the previous night.

Hours later, participants will return to the turtle beach where they will have the opportunity to help the researchers measure the turtles and record data.

Participants will also enjoy activities such as a walking tour of Old Havana, a visit to the National Museum of Natural History, a visit to the Alamar Organoponic Gardens and leisure time.

The Center for Marine Research has hosted similar trips in the last couple of years, but this is the first time this experience will be made available to U.S. Citizens without special permits following the change in Cuban-American policy announced by President Obama and the State Department earlier this year. Both STC and Center for Marine Research experts will host the expedition. 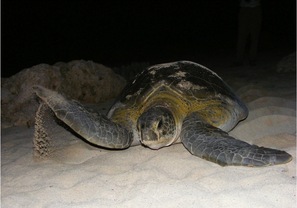 The beaches of the Guanahacabibes National Park are home to the second largest breeding population of green sea turtles in Cuba with an average of more than 300 nests per season.

2013 was a record year for the park’s beaches with nearly 900 nests recorded!

Through the efforts of University of Havana’s Center for Marine Investigations, an estimated 14,000 hatchlings were saved. You will get to participate directly in this successful Cuban conservation program, with a portion of your trip fees going directly to support this ongoing work.

Cost includes gratuities, Miami/Tampa hotel and donations to the Cuban Society for the Protection of the Environment and Sea Turtle Conservancy.

Cost does not include international airfare estimated at $600 from Miami or Tampa (estimate includes visa fee).

Posted in General, Get Involved, International|