CCC has been studying and protecting the sea turtles of Tortuguero, Costa Rica, for a half century, while simultaneously working with local community members to change the way in which they derive benefits from the turtles. Without the involvement of local stakeholders, this project never could have become the renowned success story it is today. However, despite very positive trends in green turtle nesting, and despite strong support from the majority of Tortuguero residents, there remain several worrisome threats to the Tortuguero nesting colony.

Back in the 1950s, when Dr. Archie Carr first came to Tortuguero, many of the turtles crawling ashore to nest met their fate at the hands of “veladors,” who killed nearly every turtle they could catch for its meat or calipee (the fat prized as a delicacy). In addition, the majority of eggs deposited on the beach were taken for consumption. Dr. Carr knew this scenario would lead to the extinction of Tortuguero’s turtles, as had happened at nesting beaches throughout the Caribbean. Long-term efforts by CCC, the government of Costa Rica and the people of Tortuguero gradually improved the outlook for green turtles. The nesting beach itself was protected through the creation of Tortuguero National Park in 1970, and new laws limiting and then banning turtle harvesting offered direct protection for the turtles. Slowly, local attitudes about sea turtles also changed, especially as citizens began to recognize the financial benefits and jobs created as eco-tourists began coming to see Tortuguero’s famed turtles.

When compared to other turtle nesting colonies that don’t have the advantage of nesting within a heavily monitored protected area, the turtles of Tortuguero have suffered minimal human impacts in modern times. And that, probably more than any other factor, has enabled green turtle nesting at Tortuguero to increase by nearly 500% over the last few decades.

Given these positive trends at Tortuguero, it is very disheartening that CCC is seeing an increase in illegal turtle and egg taking at this renowned beach. Even after 50 years of incredibly hard work to rescue Tortuguero’s green turtles from the brink of extinction, there remains a minority of people who are either ignorant or indifferent to the effects that killing adult females, or taking eggs from the beach, can have on the population.

In recent years, the illegal take of turtles and nests has been monitored closely by CCC, and some very worrying signs are appearing. Distinct peaks of poaching activity have been recorded in areas of the beach, even within the boundaries of Tortuguero National Park. So far in 2009, 34 green turtles have been taken from the beach; of these 58.8% were within Tortuguero National Park.

CCC works closely with the Costa Rican Ministry of Environment, Energy and Telecommunications (MINAET), which is responsible for ensuring the protection of flora and fauna within the National Park. We provide documented information relating to illegal take of turtles and eggs, which helps the agency focus on poaching hot spots. CCC also provides periodic funding for additional park rangers during the nesting season, which increases the number of people available to conduct patrols and ensure enforcement of the environmental laws. 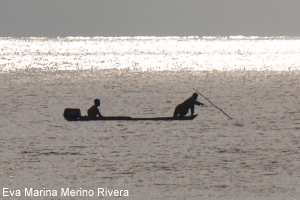 This year, CCC has become aware of a renewed threat to the Tortuguero turtles. Turtle hunters have shifted away from the killing of females on the nesting beach, probably due to increased patrols, and have started hunting them in the nearshore waters using harpoons—as was common during Dr. Carr’s earliest days in Tortuguero. The turtles are hunted from boats when they arrive to mate, just before the start of the nesting season. When sea turtles are mating they remain at the surface for extended periods of time, making them more vulnerable to the harpoons of the hunters. Three dead green turtles have been found stranded on the beach in 2009; all were adults – two males and one female. Often the males are struck with the harpoon and then discarded when the female has been caught; if the harpoon pierces the body cavity through the shell the animal will typically die.

Photographic evidence of the hunting of turtles was provided to CCC in July 2009 by a tourist who had been watching a pair of green turtles mating just off the beach. The woman saw a boat appear close to the turtles and was horrified to witness someone launch a harpoon towards them. It is disturbing to compare the 2009 image of a man using a harpoon to hunt turtles off the beach in Tortuguero with a nearly identical image taken in the 1950s. The resurgence of this activity does not bode well.

These photos were included in a letter CCC sent to MINAET and the Costa Rican Coast Guard urging increased enforcement efforts offshore. CCC has been incorporated into a multi-agency initiative focused on improving cooperation between agencies and protection for sea turtles along the entire Caribbean coast. CCC has established formal agreements between CCC, MINAET and the Coast Guard that will facilitate efforts to provide support for patrols, equipment or personnel needed to improve law enforcement. These collaborations have highlighted the key role CCC can play in helping improve turtle protection and environmental education throughout the region.

Hopefully, our cooperative efforts will help deter the recent surge in illegal poaching, and the photos of men hunting turtles with harpoons will become images of the past…not the future.