Welcome Turtle Tracker! Thank you for supporting sea turtle conservation through your purchase of a Sea Turtle Conservancy & Tortuga Moon turtle tracker t-shirt. Below is a list of turtles actively being tracked on STC’s website. Your purchase gives you exclusive access to this page where you can follow any, or all, the turtles listed below. Just click on the turtle’s image or name to view a map of their movements. If a turtle’s transmitter has not sent a signal for more than 30 days (learn why a transmitter may have stopped and other FAQs), they will be moved to the “Turtles That Are No Longer Transmitting” list. 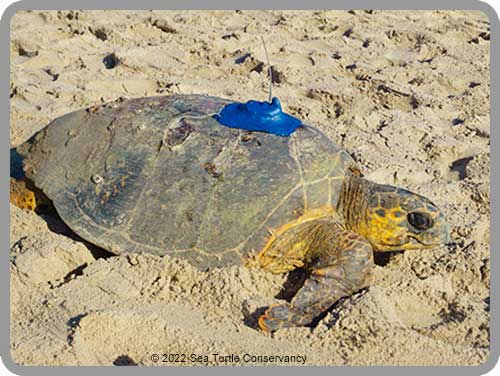 Coral
Coral is an unusual sea turtle. Researchers believe that she is female loggerhead/hawksbill hybrid sea turtle. She was released with a satellite transmitter on July 27, from the Archie Carr National Wildlife Refuge, Florida. She measured 97.5 cm curved carapace (shell) length and 91.0 cm curved carapace width. Coral is taking part in the 2021 Tour de Turtles and was named by her sponsor, . View migration map.

Turtles That Are No Longer Transmitting 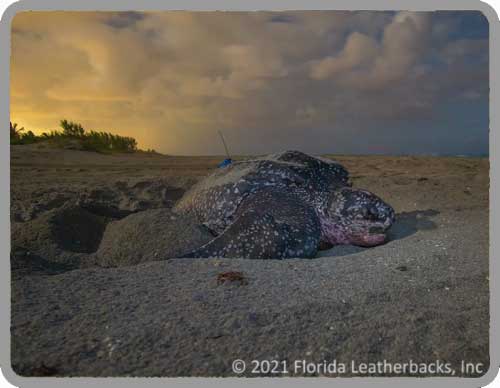 Indigo
Indigo is an adult female leatherback sea turtle that was observed nesting on May 12, on Jupiter Island, Florida, USA. She measured 157.5 cm in curved carapace (shell) length. Indigo is taking part in the 2021 Tour de Turtles and was named by her Sponsor, Sea Turtle Conservancy. View last known location. 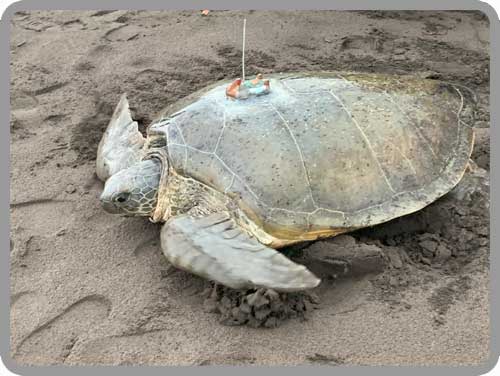 Olive
Olive is an adult female green sea turtle released with a satellite transmitter on July 12, 2021 from Tortuguero National Park in Costa Rica. She measured 107.7 cm in curved carapace (shell) length and laid 110 eggs. Olive was named by her sponsor, Wildlife Collections. She is taking part in the 2021 Tour de Turtles. View last known location. 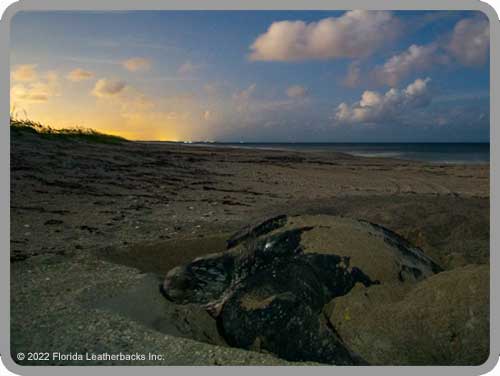 Pancake is a new adult female leatherback sea turtle that was observed nesting on March 29, 2022 on Jupiter Island, Florida, USA. She measured 138.0 cm in curved carapace (shell) length, smallest Florida Leatherbacks has ever recorded. Pancake is taking part in the 2022 Tour de Turtles and was named by her Sponsor, fahlo.

Q: Why are there such long gaps between location dates?

A: There are many possibilities for the irregularity of positions. The satellite transmitters are not always “on.” The transmitters are programmed so that they are “on” for a set number of hours then “off” for a set number of hours. This helps conserve the batteries which power the unit. In order for a location to be collected, a satellite must be in “view” of the transmitter and the turtle must remain at the surface long enough to give the satellite time to receive a signal from the transmitter. So, several things must happen at the same time for a location to be calculated.

Q: All the most recent locations on the map for my turtle are in the same place, why?
A: This is generally a result of a turtle finding a foraging (or feeding) ground. After a nesting season sea turtles migrate to a foraging area. They generally remain in this area until their next nesting season, usually one or two years later. If the location points of the turtle show movements at a closer scale, the large map will have a link to a zoomed in view of the foraging area.