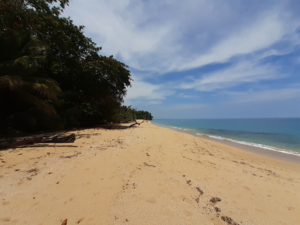 STC has been working to monitor and protect sea turtles in a remote region of Panama’s Atlantic coast that provides essential habitat for two globally-important populations of leatherback and hawksbill sea turtles. There are nearly a dozen critical sea turtle nesting and foraging sites within this area, each with its own unique characteristics and threats facing turtles.

Hawksbill hatchlings emerging from a nest on Bocas del Drago.

Over the last year, STC discovered a previously-unstudied nesting site for endangered leatherback and hawksbill turtles at a beach called Bocas del Drago. This isolated area is characterized by a short, white-sand nesting beach with coral reefs offshore. Juvenile and sub-adult hawksbills appear to live on the reef, with adult hawksbills and leatherbacks migrating to the beach each summer to nest. Because of its remoteness, both the beach and the nearshore reefs are vulnerable to illegal hunting. STC conducted sample surveys of the beach during 2019 and documented significant levels of nesting, as well as illegal harvesting of nests and the use of fishing nets in front of the beach.

As a result of these findings, STC proposes to establish a new nest monitoring and protection program at this site that will greatly benefit both species, as well as the small community of people living in the area who are trying to establish ecotourism as an alternative to the extractive use of turtles and other wildlife.

In order to facilitate the new conservation project, Lauren Mack & Dr. Tony DeFrance, MD of Tauren Properties Bocas have an ideally-located home at Bocas del Drago and are allowing STC to use the vacation residence as a base of operations for the project. This will give STC a safe and secure location from which to monitor nesting at this important site and also reduce the costs of the project.

Please consider using the form below to make a donation to support this project: