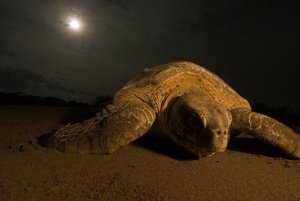 For 50 years, the Sea Turtle Conservancy has conducted annual sea turtle nest monitoring studies on the 21 mile black sand beach of Tortuguero, Costa Rica, the nesting site of more endangered green turtles than anywhere else in the Western Hemisphere. Since being initiated by Dr. Archie Carr in the 1950s, this monitoring program has provided much information on the reproductive ecology and migratory habits of sea turtles. A recent peer-reviewed analysis showed an encouraging trend in green turtle nesting activity. Through this five-decade-long conservation initiative, STC has reversed the decline of green turtles in the Caribbean.

Research methods include turtle tagging, turtle track surveys, collection of biometric data, fibropapilloma examination, determination of nest survivorship and hatching success, collection of physical data, and collection of data on human impacts to the nesting beach and the turtles. Protection methods include a cooperative effort with Tortuguero National Park officials and law enforcement to reduce poaching of eggs and turtles. Training methods include training research assistants, recruited heavily from Latin American countries, and training Tortuguero National Park guards as well as local eco-tour guides in sea turtle biology and conservation. Public outreach methods include teaching Tortuguero school children, local adults and tourists about sea turtles and working with the international media to raise awareness about sea turtles and threats to their survival.
The overall goal of STC’s sea turtle research and conservation work in 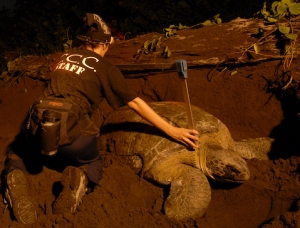 Tortuguero is to conserve the area’s nesting green and leatherback turtle populations so that these species fulfill their ecological roles. The strategies used to achieve this goal include the following: (1) monitoring and studying Tortuguero’s nesting turtles; (2) working with the Costa Rican government, the community of Tortuguero and others to protect nesting turtles from poachers; (3) training young scientists, conservationists, and others to help ensure the continuation of sea turtle protection efforts in Tortuguero and elsewhere; and (4) educating the public about sea turtles and the threats to their survival.

Since 2010, STC has collaborated with the conservation volunteer organization Global Vision International (GVI) at our program in Tortuguero, Costa Rica. GVI operates a research station at the southern limit of Tortuguero National Park, close to the Jalova lagoon. They approached STC to determine how GVI staff and volunteers could contribute to the ongoing sea turtle research and monitoring program at Tortuguero. After receiving training from STC staff, GVI personnel have assisted in implementing standard monitoring protocols at the southern end of Tortuguero, a complimentary program to STC research focus area along the northern five miles of the beach. Until this collaborative effort began, STC was only able to conduct research and monitoring efforts along the southern stretch of beach during the Leatherback Program, which runs from March – June. With this support from GVI, it has been possible to extend data collection activities during the Green Turtle Program from June – November. This research partnership is providing new information on sea turtles that nest at a different section of Tortuguero. Research may reveal that nesting sea turtles at the south end of Tortuguero are facing a dissimilar range of threats to those nesting further north. For example, nest survivorship may differ or hatching and emerging success rates may be distinct. As yet, it is too early to tell what these new data may reveal. But it is an exciting opportunity for STC to be able to implement research protocols at another part of the beach, and also to 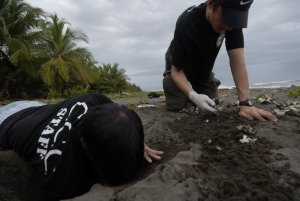 work closely with another conservation organization at Tortuguero. Through this partnership with GVI, STC is able to further promote the research and protection of threatened sea turtle populations in the region.

Continued survival of the sea turtle populations at Tortuguero will require many years of protection, but STC believes it is a feasible goal, and one that can be accomplished while providing an opportunity for research, training of professionals from Latin America and the Caribbean, and local education, as well as economic development for the Tortuguero community through sea turtle tourism.