In 1998, STC partnered with the National Aquarium in Baltimore and the US Army Corps of Engineers to provide educational maps of the tracking a rehabilited loggerhead sea turtle as part of its Satellite-Tracking Educational Program. In 2013, the Sea Turtle Conservancy, began working with sea turtle rehabilitation centers in Florida to track the movements of the turtles after being rehabilited and released back into the wild.

For more information on sea turtles, check out the Sea Turtles Information section of our website.

2019 Turtles
KIRBY – An adult male loggerhead weighing 101.2 kg and 96.7 cm curved carapace length. Kirby was was found floating near Indian Rocks Beach on January 29, 2019. Kirby was rescued and had a T-shaped wound on his head, several barnacles and algae on his carapace. He also had a buoyancy issue suspected to be caused by a GI tract problem. He was treated at the Clearwater Marine Aquarium and was released on May 14, 2019 with a satellite transmitter. 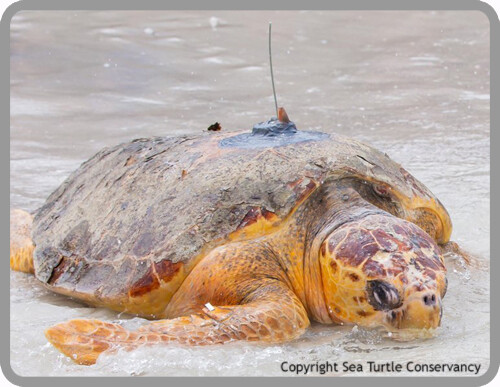 ST. THOMAS – St. Thomas was rescued in October, 2018, 3 miles offshore of Big Coppitt Key where he was found debilitated and covered in Fibropapilloma tumors. St. Thomas’ treatment at the Turtle Hospital included five tumor removal surgeries, broad spectrum antibiotics, anti-parasitic medications, vitamins, and a healthy diet of fish, squid and greens. St. Thomas is strong and tumor free! St. Thomas was released with a small transmitter on July 19, 2019.
2018 Turtles
BOWSER – An adult male loggerhead weighing 85.2 kg and 83.5 cm curved carapace length. Bowser was found floating and swimming sideways around St. John’s Sound, between Honeymoon Island State Park and Fred Howard Park on June 13, 2018. This was most likely due to gastrointestinal gas. He was treated at the Clearwater Marine Aquarium and was released on October 18, 2018 with a satellite transmitter.

COCO – A 215 pound adult male loggerhead sea turtle was rescued 9 miles offshore of Marathon in the Florida Bay and taken to the Turtle Hospital on February 27th, 2018. Coco was very thin and covered in barnacles and algae. X-rays revealed a severe intestinal impaction and pneumonia. Treatment included IV nutrition, broad spectrum antibiotics, lactulose, fluids and eventually, when he began eating, a healthy diet of fish and squid. It is a rare opportunity to track an adult male sea turtle. Coco is healthy and ready to go back to sea! We are very interested to see where this big boy goes! Named by his sponsor and rehabilitation facility, The Turtle Hospital in Marathon, Florida Keys.

DUNE – Dune is an adult female loggerhead sea turtle released on May 22, 2018 from Gumbo Limbo Nature Center’s Sea Turtle Rehabilitation Facility.  Dune was found floating in the intracoastal unable to dive by boaters and reported to Fish and Wildlife Conservation Commission on February 24, 2018. Gumbo Limbo Rehabilitation Facility treated Dune for a lung infection, related buoyancy issues, and severe emaciation. After over four months of rehabilitation, Dune has completely recovered and deemed ready for release by the sea turtle veterinarian. Dune measured 84.6 cm straight carapace length and gained over 40 lbs during her rehabilitation, weighing 176 lbs upon release!

EUPHORIA – Euphorbia is an adult female loggerhead sea turtle released on November 13, 2018 from Gumbo Limbo Nature Center’s Sea Turtle Rehabilitation Facility. She was found wounded swimming in the intake canal of the Port Everglades power plant on April 3, 2018. Gumbo Limbo Rehabilitation Facility treated Euphorbia for multiple predator related injuries to her front flippers. After over six months of rehabilitation, Euphorbia has completely recovered from her injuries and is ready to return to the ocean. Euphorbia measured 90.7 cm straight carapace length and weighed 250 lbs upon release! Data © Gumbo Limbo Nature Center. 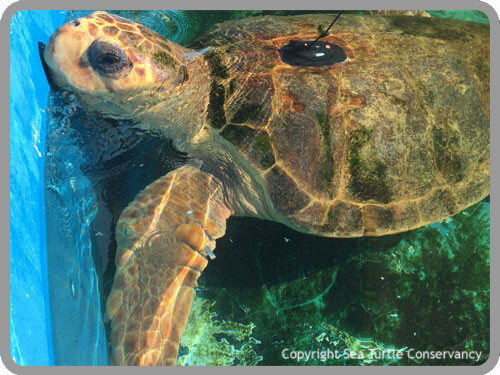 LITTLE MONEY – Little Money is a 365 pound adult female green sea turtle found by a boater beached on Money Key on June 20th. She was recused by the Turtle Hospital and FWC and was treated at the Turtle Hospital for gastrointestinal issues. Little Money received broad spectrum antibiotics, vitamins, fluids and a healthy diet. She is swimming strong, healthy and ready to return to her ocean home! Little Money is a mature female…there is a chance she may come back to shore to nest this season! Named by her sponsor and rehabilitation facility, The Turtle Hospital in Marathon, Florida Keys.
WALTER – Walter is an adult, male loggerhead that stranded on June 4, 2018. He is 101.0 cm CCL (curved carapace length) long and 90.0 cm wide. He was rescued and taken to the Clinic for the Rehabilitation of Wildlife (CROW) in Sanibel, FL where he was treated for exposure to Red Tide. He is being satellite tagged as part of a study on the movement of adult male loggerheads conducted in cooperation with Mote Marine Laboratory. He was named in honor of CROW’s 50th Anniversary and their Founder, Shirley J. Walter. 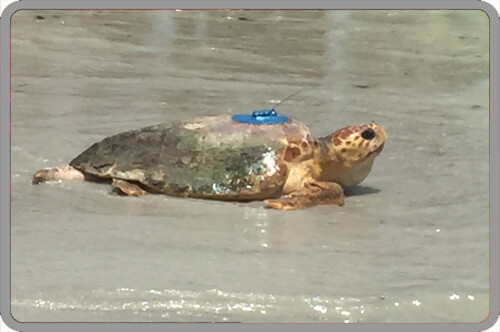 2017 Turtle
ARGUS – Argus is a juvenile green sea turtle rescued in July, 2016, 3 miles north of the 7 mile bridge in Marathon, where she was found with a trap line and buoy entangled around her rear flipper.  Argus was taken to the Turtle Hospital for treatment. Argus’ body and eyes were covered in Fibropapilloma tumors. Argus’s treatment included two tumor removal surgeries, broad spectrum antibiotics, anti-parasitic medications, vitamins, and a healthy diet of squid and greens. Argus is strong and tumor free, with a weight of 75 lbs and a shell length of 67.9 cm, and took part in the 2017 Tour de Turtles. 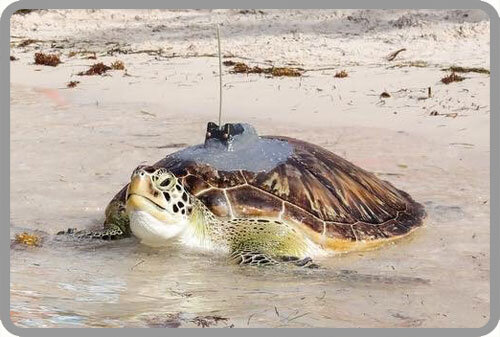 2016 Turtle
FLEMING – Fleming was rescued in March, 2015 just 200 feet off of Fleming Key in Key West where a boat captain found him entangled in fishing line, tethered to a piece of pvc piping. Fleming’s body and eyes were covered in Fibropapilloma tumors. Fleming treatment at the Turtle Hospital included five tumor removal surgeries, antibiotics, anti-parasitic medications, vitamins, and a healthy diet of squid and greens. After rehabilitation at the Turtle Hospital, Fleming is strong and tumor free, measuring 73.4 cm curved carapace length, 73.8 cm curved carapace width, and weighing 84 lbs. Fleming was fitted with a small transmitter on July 22, 2016 and released from Sombrero Beach, Florida Keys, FL.

KREACHER – Kreacher is a sub-adult loggerhead sea turtle and weighs nearly 100 pounds. Kreacher was rescued a half a mile offshore Clearwater Beach on May 8th. She was found floating and distressed with moderate edema. She received a round of Total Parenteral Nutrition before moving to tube feeding and finally solid food. By the end of May Kreacher showed great improvement while at Clearwater Marine Aquarium and was selected to receive a satellite tag. Kreacher weighs over 43 kg and measured 68.0 cm in straight carapace (shell) length and 65.4 cm straight carapace width.

XENO – Xeno (short for Xenophilius) is a sub-adult loggerhead sea turtle rescued about 15 miles offshore Clearwater Beach on September 17, 2016. She was found floating and unable to dive. X-rays showed that Xeno’s intestine was compacted by an extensive amount of shell-like material. Clearwater Marine Aquarium provided treatment that included lots of liquid, helping Xeno pass the material, which turned about to be nearly 5 lbs of crushed shell. Just over a month later, Xeno showed great improvement and was selected to receive a satellite tag. Xeno measured 73.4 cm in curved carapace (shell) length and 57.6 cm straight carapace width.

2015 Turtles
AARON – Aaron is a sub-adult loggerhead sea turtle. A boat captain found Aaron floating in the marina of Key Largo Angler’s Club located in the upper keys on March 19, 2015. Aaron was emaciated, covered in epibiota, and suffered from an intestinal impaction and a heavy load of internal parasites. Aaron was treated at the Turtle Hospital with broad spectrum antibiotics, anti-parasitic medications, lactulose, vitamins, and a healthy diet of squid and fish. When Aaron was released with a transmitter on July 17, 2015, he measured 70.0 cm in curved carapace (shell) length and weighed of nearly 80 pounds.

OZZY – On November 23, 2013, Ozzy was found caught up in fishing line and a crab trap rope in open water off of Pasco County. The entanglement caused a severe laceration around the base of her right front flipper, which resulted in her immediate transportation to Clearwater Marine Aquarium for treatment. Shortly after arrival, a spiral fracture through Ozzy’s humerus was identified in addition to the serious laceration. Through therapy and wound care, she regained her strength under the watchful eye of the turtle team. Ozzy measures 81.9 cm in curved carapace (shell) length and weighs over 160 pounds. After passing several veterinary tests to assess her deep water swimming strength and her ability to hunt for food, Ozzy was cleared for release from Clearwater Beach on September 9, 2015. 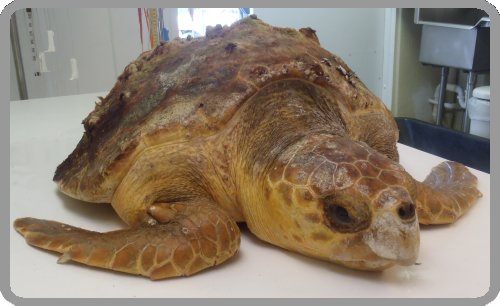 LITTLE CRUSH – Little Crush is an endangered juvenile green sea turtle who was rescued by the University of Central Florida’s Marine Turtle Research Team from the Indian River Lagoon near Melbourne Beach. Little Crush was very weak from swallowing more than 70 pieces of marine pollution including bits of balloons, plastic bags, monofilament line, and string! The turtle was cared for by a team of veterinarians and animal care specialists from Walt Disney World’s Living Seas. I only weighed 5 pounds when rescued and am approximately 2-3 years old. A satellite transmitter specifically designed for small sea turtles was placed on his shell and he was released near Disney’s Vero Beach Resort, located just south of the Archie Carr Refuge on Florida’s central east coast.The Walt Disney World Animal Programs team has been involved in sea turtle rehabilitation for many years. To date, The Living Seas team has cared for and released more than 200 turtles! Most of the turtles that find their way to Walt Disney World are animals that have been rescued by various organizations and come to us with medical challenges. A majority of the turtles suffer from physiological problems attributed to extended periods of time in cold water. These cold stunned turtles are rescued, rehabilitated at The Living Seas, and then released under the supervision of the Florida Wildlife Conservation Commission.

1998 Turtle
PERDIDA – On August 13 1998, researcher Dr. Dave Nelson, U.S. Army Corps of Engineers’ Waterways Experiment Station, attached a satellite transmitter to the back of a subadult loggerhead sea turtle named Perdida, meaning lost in Spanish. Perdida was recovering from “cold stunning”, which is similar to hypothermia, at the National Aquarium in Baltimore, Maryland. Staff and volunteers from the Aquarium’s Marine Animal Rescue Program have cared for the turtle since it was brought to the Aquarium in October, 1997. Perdida was released from Assateague Island, Maryland on the morning of August 14. The juvenile loggerhead weighed around 50 kg and measured 74.8 cm long.