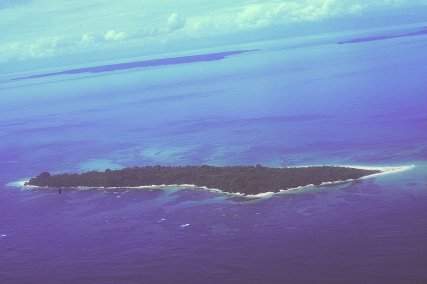 Both hawksbill and green sea turtles have been attached with satellite transmitters. For the hawksbill turtle, it is important to determine resident feeding grounds, i.e., where they live when not reproducing. For the green turtles, the goal is to capture migration as they leave developmental habitat for other feeding grounds.

The researchers thank the wildlife authority of Panama (Autoridad Nacional del Ambiente) and the Smithsonian Tropical Research Institute for their many years of support for this work. We also thank Beth Brost of FWC for her assistance with the satellite data.

EVALINA – Evalina is an adult female hawksbill turtle who was captured on June 15, 2006, on a reef near the Zapatilla Cays, in the Bastimentos Island National Marine Park, Bocas del Toro Province, Panama. She was captured in a large-mesh tangle net by researchers Drs. Anne and Peter Meylan. The turtle measured 78.7 cm in straight carapace length and weighed 165 pounds. She was suspected to be a reproductive female, having been captured only one mile from a nesting beach (on Zapatilla Cays) during the nesting season. Within a few days of her release, Evalina traveled to the vicinity of Chiriqui Beach, the largest nesting beach for hawksbills in the province, and signals received from the satellite suggest that she may have nested there. June is early in the hawksbill nesting season, so it’s possible that she will remain in the area for several more weeks. She was tagged with MY576 and CH0093.

Turtles Tagged in 2002 – In July 2002, two adult female hawksbill turtles were satellite tagged after nesting on Zapatilla Cays, in Bastimentos Island National Marine Park. A third turtle, a large subadult green turtle captured in a net, was also equipped with a satellite transmitter.

Argelis is an 85-cm hawksbill turtle that nested in the Zapatilla Cays on July 17, 2002. She weighed approximately 170 pounds. Her nest contained 178 eggs. She remained in the area after her release and may have nested again before departing northwest along the coast. After completing a wide loop in the open ocean off Costa Rica, she returned to the coast in southern Nicaragua and headed north. It is hoped that her transmitter will continue to function long enough to reveal her home feeding grounds.

This 82-cm green turtle was captured in our nets on July 9, 2002, at Zapatilla Cays, Bocas del Toro Province, Panama. Via a technique called laparoscopy, in which the turtle’s reproductive organs can be viewed through an internal telescope, we determined that this animal was an immature female. She is larger than most immature green turtles that reside in the area, and thus we expect her to depart for other feeding grounds in the next several months or so. With the satellite telemetry equipment, we hope to obtain information about this developmental migration, including timing of departure, the route of travel, travel speed, and the ultimate destination. The track reveals that after an initial movement to the southeast, along the Valiente Peninsula, she has spent considerable time off the town of Bocas del Toro, in an area with an active harpoon fishery for green turtles. Most of the other green turtles of similar size that we have tagged at Zapatilla Cays have been recaptured by fishermen in Nicaragua.

MINNIE MAE (PTT 25326) –
Minnie Mae is an adult female hawksbill turtle that was satellite-tagged after nesting on the night of July 8, 2002, in the Zapatilla Cays, Bocas del Toro Province, Panama. Her shell measured 82.3 cm in straight length. The Zapatilla Cays are part of the Bastimentos Island National Marine Park which includes both protected nesting beaches and nearshore waters that are used by mating hawksbills and green turtles. During the 17-days that the transmitter was active, the turtle apparently traveled to the area of Chiriqui Beach, an 18-mile beach that was once thought to be the most important hawksbill nesting area in the Caribbean. However, it is not clear from the data whether she emerged there. Her last sighting was back near the Zapatilla Cays where she had originally nested.

Turtles Tagged in 2000 – On July 20, 2000, an adult male and an adult female green turtle (Hudson and Lausanne) were captured together in the same net off Zapatilla Cay, Bocas del Toro, Panama. They were equipped with Telonics ST-14 transmitters and released the same day at the site of capture. The female was expected to travel to Tortuguero, Costa Rica, the principal nesting site for the green turtle in the western Caribbean. Previous satellite tracking experiments, tag returns, and DNA data collected during the last ten years as part of this study have provided strong evidence that adult green turtles captured at this time of year off Zapatilla Cay are members of the population that nests at Tortuguero, Costa Rica. The travel destination of the male was less predictable because previous satellite tracking experiments in 1995 and 1998, and tag returns showed that males do not always travel to the nesting beach.

HUDSON – Hudson is a 190-pound male green turtle that was captured by researchers with a turtle net near Zapatilla Cay on July 20, 2000. He was found in the same net with “Lausanne, ” an adult female green turtle that was also satellite- tagged that same day. Hudson traveled to Tortuguero, Costa Rica, where he spent several days before continuing on to the Miskito Cays area of Nicaragua.

LAUSANNE – Lausanne, a 310-pound female green turtle, was captured by researchers with a turtle net near Zapatilla Cay on July 20, 2000. She spent more than two months at Tortuguero, presumably nesting several times. Around 30 September, she began a journey north up into Nicaragua. Curiously, she reversed her course on 2 October and returned to Tortuguero again by October 7th! Data received from the transmitter suggested that she may have nested again. On the 11th of October, Lausanne was swimming north again, into Nicaraguan waters.

Funding for this project was provided by the Wildlife Conservation Society. Thanks are due to Autoridad Nacional del Ambiente for allowing this work to be conducted, to the Smithsonian Tropical Research Institute for logistical support, and to Inocencio Castillo and Herman Georgette for field assistance.