The University of Central Florida (UCF) began a sea turtle research and conservation project to study the migration patterns of endangered green sea turtles from the Archie Carr National Wildlife Refuge on the central east coast of Florida. This project is unique in that it will include the satellite tracking of two green turtle mating pairs and conduct studies specific to each sex. Both males and females will be sampled for genetics and stable isotope analysis. The females will be tracked to look at clutch frequency, site fidelity, inter-nesting location and foraging grounds. Each female’s nest will be marked for determining reproductive success. Satellite data will show how long each sex remains at the beach, the migratory routes used and final destinations at their respective foraging grounds. Areas of special use at the nesting beach will be identified for each sex, and home range estimates will be generated once they return to foraging areas.

In 2013, a total of five green turtles were satellite tagged, two pairs and a single post-nesting female were tagged. In 2014, three post-nesting female green turtles were satellite tagged. In 2015, the focus was on male green turtles, and they showed up so early this year that all six males had been satellite tagged almost before the official start date of the project. There were so many males available that twice as many could have easily been tagged this year. Educational migration maps produced by STC will show location points of the turtle’s movements. STC is excited to be able to include these tracks as part of it’s online educational program and allow interested persons all over the world to watch along as we learn more about these amazing animals.

Photos under a FWC Research Permit

CHIEF – “Chief” is a 90.7cm male green turtle named for Dave Hochberg, longtime friend of UCF and Chairman of the Board of the Sea Turtle Preservation Society (STPS) in Indialantic, Florida. Dave has been an integral part of that group since 1999, when he began doing turtle walks. Over the next 17 years he conducted or participated in over 600 walks. In 2000 he also began doing nesting surveys, strandings and educational outreach. He was listed on all three permits for over 15 years, participating in many aspects of sea turtle research and conservation.

IRIS – “Iris” (pronounced “Eer-us”) is a 99.5 cm female originally tagged by the UCF group in 2004. Seen twice in that season, she had not been seen since. The Sea Turtle Preservation Society of Indialantic, FL provided this tag, and chose to name this turtle after Iris Reinhold, a member of their group. Iris (the person) moved from Germany to the Melbourne area in 2001, and began volunteering with the Sea Turtle Preservation Society in 2002. For several years she was listed on three different turtle permits. She conducted stranding and salvage operations under the Stranding Permit for approximately 6 years, she has been on the Survey permit for approximately 10 years and she has been an important part of the Turtle Walk team since 2002. She has always had a deep passion and empathy for sea turtles and is thrilled to have a turtle named for her.

Photos under a FWC Research Permit

MARIO – “Mario” was the first male green turtle of the 2015 season. Tagged on May 3, 2015. Mario was named for former student and friend, Mario Mota. Our encounter with the first transmitter turtle of the season coincided with Mario’s birthday so we thought it would be a fitting present to name it for him. Mario got his start with sea turtles working in Melbourne Beach with UCF in 1994 before working with manatees for his M.S. He found his way back to study the relationship between nourished beaches and the effects on hatchlings for his PhD and has remained involved ever since. He is now a Professor at National University in San Diego, and has been teaching a Marine Biology course with a focus on sea turtles in Belize each summer for the last nine years. He continues to study sea turtles and nourishment in Florida. Happy Birthday, Mario!

BRIAN – “Brian” was the second male green turtle of the 2015 season. Tagged on May 18, 2015. Brian was named for two of the great sea turtle geneticists, Brian Bowen and Brian Shamblin. Brian Bowen began revolutionizing the world of sea turtles with his genetics in the early 1990s, showing us how populations were structured and how species were determined. Brian Shamblin has carried that to a new level, giving us an even closer look; refining and re-defining haplotypes to show us even more closely, how populations are structured. His work has just begun to show the relatedness of individuals in a population, and how nesting beaches are being used by those individuals. These two Brians have changed the way we look at sea turtles and sea turtle populations forever.

BOYD – “Boyd” was the third male green turtle of the 2015 season. Tagged on May 18, 2015. Boyd was named for the late (and we think great) Boyd Lyon, one of our own who was lost to us in 2006. Boyd’s passion for sea turtles, and for learning about male green turtles in particular fueled the impetus for this project. The opportunity to realize his goals presented itself when mating green turtles began floating in and onto the beach where we could encounter them. Because adult male turtles are so rarely seen, this allows us to collect basic biological data like morphometrics, and samples for genetics and stable isotope analysis. It will also allow us to follow local and migratory movements. We hope we can begin to answer some of the questions that Boyd was asking.

DOC – “Doc” was the fourth male green turtle of the 2015 season. Tagged on May 25, 2015. Doc was named for Llewellyn Ehrhart, who ran the UCF Marine Turtle Research Program until he retired in 2013 after working with sea turtles for 40 years. He got his start at the Space Center, working on the beaches of Canaveral National Seashore and the Merritt Island National Wildlife Refuge before moving the entire research project to Melbourne Beach in 1982. The transmitter and air time for this turtle were generously provided by the Sea Turtle Preservation Society (STPS) in Melbourne Beach, and as such, they asked that the turtle be named in honor of Doc Ehrhart. Thanks to the Sea Turtle Preservation for making this deployment possible! Photo by Ilene Spears.

JIM – “Jim” was the fifth male green turtle of the 2015 season. Tagged on May 26, 2015. Jim was named for the World’s Best Dad (that would be Dean’s dad), who is always there when she needs him, and who has visited the project to see turtles many times over the years, and for Jim Stevenson, who has been a great friend, a staunch supporter and volunteer extraordinaire since 1996. Because this project was not officially slated to begin until tonight, this was the first attachment that Jim Stevenson had seen this year. Coincidentally, we met a man on the beach that night who stayed to watch the entire process because he was so interested, then helped us put away our gear was also named Jim (Lewis). Photo by Jim Stevenson. 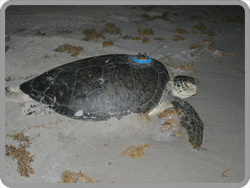 PETER – “Peter” was the sixth, and final, male green turtle to be tagged in the 2015 season. Tagged on May 27, 2015. Peter was named for the world’s foremost authority on turtles, and a friend to the UCF group for well over 30 years, Dr. Peter C.H. Pritchard. Peter is the President of the Chelonian Research Institute in Oviedo, Florida, which houses the most comprehensive collection of Chelonians in existence, with 100% of genera and about 95% of living species represented. With his soft-spoken logic, he’s turned many a turtle hunter into a turtle protector. The Discovery Channel named him “Champion of the Wild”, Time Magazine called him a “Hero for the Planet”, the Orlando Sentinel named him “Floridian of the Year” and if turtles could vote, he’d be named the greatest man who ever lived. We’d vote for him, too! Video taken by Mario Mota.

Photos taken by Jim Stevenson under a FWC Research Permit

LINDA – Linda was the first green turtle of the 2014 season. She was originally tagged by UCF on June 12, 2010 just one kilometer north of where she was found in 2014. Straight carapace length was 100.2 cm. Named for friend, neighbor and huge sea turtle advocate, Linda Bradley.

DAWN – Dawn was the second green turtle of the 2014 season. She was originally tagged on May 26, 2011, less than half a kilometer from where she was found in 2014. Straight carapace length was 97.7 cm. Named for gifted local artist Dawn Witherington, and for Dean’s mom. Because we use red lights when doing the attachment, we didn’t notice the discoloration on her shoulder until we looked at these photos later. We believe it is from recent mating scars to her carapace and shoulder region.

JANET – Janet was the third green turtle of the 2014 season. She was been originally tagged by UCF on July 26, 2010 less than two kilometers from where she was found in 2014. Straight carapace length 106.7 cm. Named for friend and staunch turtle advocate and UCF volunteer, Janet Hochella.

EVIE – Evie is an adult female green sea turtles released with a satellite transmitter on June 2, 2013 after nesting in the Archie Carr National Wildlife Refuge in Florida. 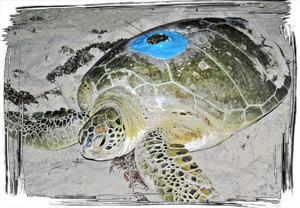 JOCELYN – Jocelyn is an adult female green sea turtle from a mating pair that washed ashore. She was paired with Sir William. She was released with a satellite transmitter on June 4, 2013 from the Archie Carr National Wildlife Refuge in Florida.

SIR WILLIAM – Sir William is an adult male green sea turtle from a mating pair that washed ashore. He was paired with Jocelyn. He was released with a satellite transmitter on June 4, 2013 from the Archie Carr National Wildlife Refuge in Florida.

LOLA – Lola is an adult female green sea turtle from a mating pair that washed ashore. She was paired with Frankie. She was released with a satellite transmitter on June 4, 2013 from the Archie Carr National Wildlife Refuge in Florida.

FRANKIE – Frankie is an adult male green sea turtle from a mating pair that washed ashore. He was paired with Lola. He was released with a satellite transmitter on June 4, 2013 from the Archie Carr National Wildlife Refuge in Florida. 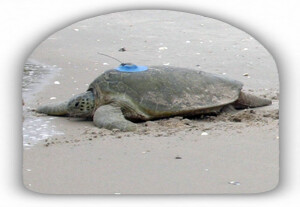