Description: Head is very large with heavy strong jaws. Carapace is bony without ridges and has large, non-overlapping, rough scutes (scales) present with 5 lateral scute. Carapace is heart shaped. Front flippers are short and thick with 2 claws, while the rear flippers can have 2 or 3 claws. Carapace is a reddish-brown with a yellowish-brown plastron. Hatchlings have a dark-brown carapace with flippers pale brown on margins.

Diet: Primarily carnivorous and feed mostly on shellfish that live on the bottom of the ocean. They eat horseshoe crabs, clams, mussels, and other invertebrates. Their powerful jaw muscles help them to easily crush the shellfish.

Habitat: Prefer to feed in coastal bays and estuaries, as well as in the shallow water along the continental shelves of the Atlantic, Pacific and Indian Oceans.

Status: U.S. – Listed as Threatened (likely to become endangered, in danger of extinction, within the foreseeable future) under the U.S. Federal Endangered Species Act. International – Listed as Vulnerable (facing a high risk of extinction in the wild in the near future) by the International Union for Conservation of Nature and Natural Resources.

Threats to Survival: The greatest threat is loss of nesting habitat due to coastal development, predation of nests, and human disturbances (such as coastal lighting and housing developments) that cause disorientations during the emergence of hatchlings. Other major threats include incidental capture in longline fishing, shrimp trawling and pollution. Incidental capture in fisheries is thought to have played a significant role in the recent population declines observed for the loggerhead. 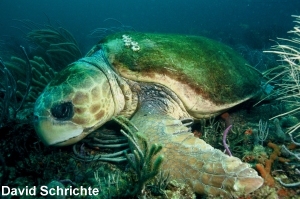 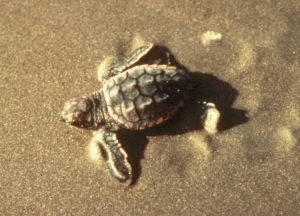 Nesting site locations and classification are based on several sources: Sea Turtles – A Complete Guide to Thier Biology, Behavior, and Conservation by James Spotila, 2004; The Worldwide Distribution of Sea Turtle Nesting Beaches, Center for Marine Conservation, 1981; and from SWOT.

* Please understand that world wide population numbers for sea turtle species do not exist and that these are estimates of the number of nesting females based on nesting beach monitoring reports and publications from 2004.