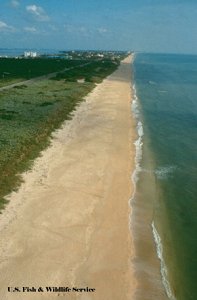 Long stretches of quiet, undisturbed sandy beaches, with little or no artificial light, are essential to the reproductive success and survival of sea turtles. This fact is recognized in sea turtle recovery plans developed by the U.S. Fish and Wildlife Service, which call for purchasing and protecting the best remaining nesting beaches.

In North America, sea turtles primarily nest from North Carolina through Florida, with over 90% occurring in Florida. Within that range is the Archie Carr National Wildlife Refuge, a 20.5-mile stretch of beach between Melbourne and Wabasso, along Florida’s east central coast. The Refuge attracts more nesting for threatened loggerhead turtles than virtually anyplace else on Earth. These Brevard and Indian River County beaches also attract more nesting green turtles, an endangered species, than anyplace in the continental U.S. Even the endangered mammoth leatherback turtle occasionally climbs up on these beaches to deposit its eggs in the sand. Protection of these beaches is essential to the survival of loggerheads and green turtles in North America.

To preserve this globally important nesting ground, the U.S. Fish and Wildlife Service (USFWS) is in the process of acquiring the remaining undeveloped lands between Melbourne Beach and Wabasso. The State of Florida, Brevard and Indian River Counties, the private Mellon Foundation and the USFWS, are each contributing money in the effort to buy land from willing sellers within the proposed refuge boundary. By mid-1996, over $60 million had been spent to purchase 4.7 miles of beachfront out of 9.3 miles targeted for acquisition (61% of available targeted land).


How Was the Refuge Named? 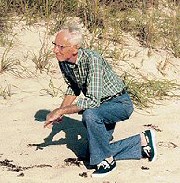 The idea to establish a national wildlife refuge to protect sea turtles began in the late 1980’s as a direct result of the work of world-renowned ecologist Dr. Archie Carr, Jr. (picture at right). When Congress approved the refuge proposal, it was decided then to name the refuge in honor of Dr. Carr’s contributions to the understanding and conservation of sea turtles.

Dr. Carr was a zoology professor at the University of Florida, whose ability to translate science into literature brought the first international attention to the plight of sea turtles. Dr. Carr helped found the Sea Turtle Conservancy (STC), then known as the Caribbean Conservation Corporation, to conduct research, education and advocacy on behalf of sea turtles; he wrote 11 books and over 120 scientific articles about sea turtles and their habitats before his death in 1987. Through its Sea Turtle Survival League program, STC is today helping enhance, protect and promote the Archie Carr National Wildlife Refuge.