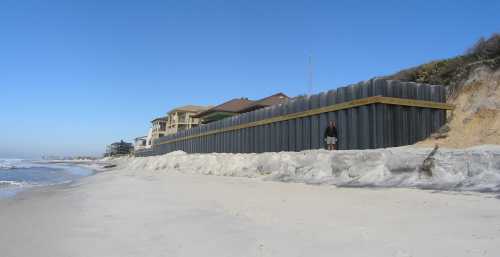 On July 10, 2005, hurricane Dennis made landfall just east of Pensacola Beach in the western Panhandle of Florida. Sustained, strong, on-shore winds; storm surge; and the storm’s trajectory up the eastern Gulf caused extensive beach erosion in areas to the east of landfall. Walton County, which contains some important nesting habitat for northern Gulf Coast loggerhead turtles, experienced extensive dune recession and beach erosion. But the erosive impacts of Dennis were not unique. Walton County experienced comparable erosion from Hurricanes Eloise (1975), Opal (1995), and Ivan (2004). The erosion from Ivan the year before was exacerbated by Dennis.

Within days after Dennis’ landfall, Walton County began granting permits to beachfront homeowners for the construction of sea walls under Florida’s “emergency armoring” law. Under that law, after an emergency is declared following a storm, local governments are granted authority by the state to permit their residents to build “temporary” emergency sea walls. The law was designed to allow citizens to act quickly to protect their homes following major storms. After obtaining a permit for a temporary wall, a resident has 60 days in which to apply for a permit from the state that would allow the wall to remain in place permanently. Without a declared emergency, only the Florida Department of Environmental Protection (DEP) has the authority to grant a permit for the construction of a sea wall — and then only when all regulatory requirements governing design, location, and coastal resource protection are met. Theoretically, any emergency seawalls should be designed and built in such a manner that they conform with the regulations governing the state’s seawall permitting process, thereby allowing the homeowner to qualify for the final state permit.

From the beginning, the permits issued by Walton County were controversial. CCC began receiving calls in August, 2005, from coastal residents and conservationists in Walton County concerned about construction of walls during turtle nesting season and walls being constructed much further onto the active beach than would be allowed by the state. CCC immediately was concerned that state armoring laws and the federal Endangered Species Act (ESA) were being violated. CCC alerted DEP officials about this troubling situation and sent a letter to the Walton County Commission alerting it to the possible state and federal violations.

Under state law, emergency sea walls must be designed so that they can be easily removed after the emergency has passed — or in the event the wall fails to meet state guidelines. The walls also are supposed to be built as close to the threatened home as possible, generally no more than 20 feet seaward of the structure. Despite these requirements, Walton County authorized permanent steel and concrete walls to be built 40, 60, or in some cases more than 80 feet seaward of any structures. As a result, homeowners were being allowed to confiscate portions of the public beach that are now trapped behind new walls. In addition, in many areas these walls eliminated all remaining viable turtle nesting habitat on a particular stretch of beach.

As adjacent residents saw neighbors building seawalls so far seaward, they became worried about how the walls would increase erosion on their own property. A seawall building frenzy ensued. Since July 2005, the county has authorized the construction of between 250 and 275 sea walls along 26 miles of beach. Some walls were even built on empty lots, where no structure was threatened. Still others were built in front of new homes set far enough back from the beach that they were in no immediate threat of erosion. Ordinarily, for a home to qualify for a state armoring permit it must be proven vulnerable to erosion and must have been constructed before the state’s coastal building codes went into effect in the 1980s. Homes built to comply with tougher coastal construction standards are supposed to be ineligible for armoring.

Harm to Turtles
There is little doubt that many of the Walton County walls were constructed so far onto the nesting beach that they will directly interact and interfere with sea turtles trying to nest. As this occurs, the county and the homeowners will be in violation of state wildlife laws, as well as the Endangered Species Act. It’s a complicated situation, to be sure, and much of the damage has already been done. However, federal law establishes a system whereby harm caused to endangered species can be mitigated (or compensated for) and future impacts from an activity (such as coastal armoring) can be minimized. The process would require that Walton County develop a Habitat Conservation Plan (HCP) for sea turtles. If the HCP is approved by the U.S. Fish and Wildlife Service (USFWS), the county would be granted an Incidental Take Permit (ITP), which allows some level of harm to sea turtles in exchange for the beneficial actions undertaken as part of the HCP. In September 2005, CCC began trying to convince Walton County officials of the need to develop an HCP. We offered to assist in the process to ensure the greatest level of benefit for marine turtles. The USFWS expressed its own concerns in a letter to county commissioners. The agency advised the county that illegal “take” of sea turtles occurred as a result of county actions. That letter stated, “we estimate that 72 percent of completed (seawall) projects resulted in incidental take of federally protected species.”

The county seemingly has ignored many of the state laws regulating the permitting of emergency seawalls simply by claiming that regulations are vague. The county also contends that the state gave its consent for most of the permits issued. The Florida DEP, meanwhile, has not acted aggresively enough to prevent even the most egregious violations in Walton County, opting instead to review each case as homeowners apply for permits to make their walls permanent. CCC is encouraging DEP to force the removal of any walls that violate state guidelines. However, the state typically is reluctant to force the removal of seawalls, opting instead to grant variances that allow violations to remain. If this happens with the worst cases in Walton County, CCC may have no choice but to consider legal challenges, unless the county offers to carry out meaningful mitigation actions as part of the HCP.

As of this printing, the Walton County Commission has declared its intent to develop a Habitat Conservation Plan for sea turtles. CCC will be involved closely in the process. Despite the opportunity for reforms in this county, CCC is concerned that other Florida counties may choose to ignore state and federal laws regarding seawall construction and sea turtle protection, given the impunity with which Walton County skirted the regulatory process. It is clear that coastal armoring laws urgently need to be strengthened and better enforced to safeguard what remains of Florida’s globally important sea turtle nesting sites. Toward that end, CCC has redoubled its efforts to promote coastal policy reforms. We also will encourage state and federal agencies to begin using the full force of their current authorities to protect marine turtles and coastal habitat.

Just as this issue of the Velador was going to press, two good bills related to coastal policy were passed by the Florida Legislature and sent to Governor Jeb Bush for final signature. CCC was closely involved in developing both bills and in ushering them through the legislative process.

The first bill (SB 2216) implements the recommendations of the Coastal High Hazard Study Committee, a 19-member body created last year by Florida’s governor to propose needed changes to coastal development and erosion control policies. CCC Policy Coordinator Gary Appelson was appointed by the Governor to fill the “environmental advocate” position on the committee. The just-passed bill establishes tighter controls on the use of large, sand-filled bags (or “geotubes”) to combat erosion. The new regulations limit the use of these systems and afford sea turtles greater protection. Another of the bill’s provisions gives Florida DEP the authority to stop coastal counties from issuing emergency seawall permits if the local government’s actions harm the beach-dune system; adversely impact adjacent properties; or harm nesting sea turtles.

The second beneficial bill (SB 1948) to pass is known as the Coastal Hazard Notification Law. This language was developed by CCC and the University of Florida College of Law to fill a loophole in Florida coastal real estate statutes.

The bill was sponsored by Florida Senator Rod Smith (D) and Representative Stan Mayfield (R). Under the new law, all prospective buyers of beachfront property in Florida now must be informed by the seller of information pertaining to erosion rates that might affect the property in the future. Buyers also must be informed that their coastal property may be subject to federal, state, or local laws regulating construction of sea walls, beach nourishment, or the protection of marine turtles.