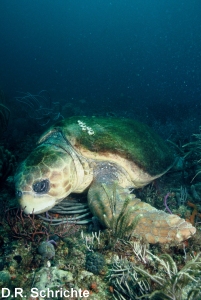 In alarming decline in loggerhead sea turtle nesting throughout Florida continued during the 2007 nesting season, when nest totals for the year reached the lowest levels observed in Florida since systematic nest monitoring began nearly 20 years ago. Declining numbers of nesting loggerheads also have been documented in Georgia and the Carolinas. After a period of moderate growth in the loggerhead population throughout most of the 1990s, the drastic decline observed over the last nine years is a major setback for U.S. sea turtle conservation and recovery.

With protections provided by the Endangered Species Act in 1973 and requirements for turtle excluder devices to prevent the drowning of sea turtles in the nets of the U.S. shrimp fleet nearly two decades ago, loggerhead nesting in Florida increased steadily from 1989 until 1998, with a peak at about 85,000 nests. Although nesting numbers fluctuate from year to year, since 1998 nesting has declined steadily. During the 2007 season, nesting was only about half of what it was in 1998; it has dropped 22% below levels observed in 1989, when comprehensive statewide data collection began.

In the Archie Carr National Wildlife Refuge, located on the central east coast of Florida, nesting has declined by 63% since 1998. This area hosts one of the world’s largest loggerhead nesting aggregations. The U.S. Fish and Wildlife Service’s Five-Year Loggerhead Status Review (2007) documents an annual decline of 6.8% in the distinct Florida Panhandle subpopulation over the period of 1995 to 2005. The northern subpopulation nesting in the Carolinas and Georgia has also shown a significant long-term nesting decline.

The worrisome decline of loggerhead nesting is the result of complex and, in all likelihood, long-term changes in the loggerhead’s environment. One of the forces at work involves significant and increasing threats posed by a host of fisheries using longlines, trawl and gill nets, and dredges. In recent years, attention has focused on the role of wider Atlantic fisheries as a major cause of the loggerhead decline. These fisheries operate in the open ocean and in the Eastern Atlantic, where immature and sub-adult loggerheads spend many years after emerging from nests on Florida’s beaches.

Loss and degradation of Florida’s nesting beaches caused by coastal development poses ongoing problems for sea turtles. Artificial lighting on increasingly developed nesting beaches confuses hatchlings emerging from nests and lures them inland rather than toward the water. On urbanized beaches, coastal armoring to protect buildings from erosion has resulted in the loss of suitable nesting habitat, which can force turtles to nest in suboptimal habitat subject to inundation and scouring from the surf. The dredging and engineering of navigation inlets disrupts the natural flow of sand along the coast and hastens erosion down the beach. Some estimates suggest that up to 75% of non-storm-induced coastal erosion is directly related to Florida’s navigation inlets.

Climate change and rising sea levels pose significant new challenges as well, especially on developed beaches already facing impacts from inlet and storm-generated coastal erosion. In Florida, where 90% of all nesting in the continental U.S. occurs, the past five years have seen an increase in the number and frequency of hurricanes that have eroded nesting beaches and wiped out thousands of incubating nests. Experts say this weather trend is likely to continue.

Taken together, this very real set of factors combines to create a “perfect storm” that threatens the recovery and survival of loggerheads. It is encouraging that government agencies and conservation groups are at least aware of the declines and are working to reduce the threats and reverse the declines. At the forefront of this effort, the Caribbean Conservation Corporation is addressing the impacts to sea turtles from commercial fishing, coastal development and sea level rise through the work of a dedicated and experienced staff working at the local and international level.

Commercial fishing
Atlantic fisheries are major culprits in the loggerhead’s decline. Each year as many as 150,000-200,000 interactions with immature loggerheads may occur in international Atlantic longline fisheries. However, various other types of gear, such as gill nets, trawls, pot fisheries and dredges used by American fishermen targeting shrimp, shellfish, finfish, sharks, swordfish and tuna inadvertently capture, injure and kill sea turtles in the Atlantic and Gulf of Mexico. Not all interactions are lethal, but thousands of turtles perish each year and undocumented numbers of animals are severely injured. Unobserved and unregulated state fisheries also are a major impediment to efforts to reduce sea turtle bycatch, as no state has an observer program to document sea turtle interactions with its fisheries.

The United States has to do a better job regulating fisheries to reduce capture and recover loggerheads by providing appropriate levels of observer coverage in fisheries; adopting regulations for problematic fisheries; obtaining realistic estimates of overall levels of capture; and funding experimental work for technological gear modifications to reduce turtle capture. In particular, the National Marine Fisheries Service (NMFS) needs a greater sense of urgency in dealing with this problem.

Over the next few years, the focus of CCC’s new Washington, DC- based fisheries program will be to reduce sea turtle capture in fisheries throughout the Atlantic Ocean by working on many levels with NMFS and other government agencies, regional fishery management organizations, fishermen, the media, and other conservation groups. We are working for the adoption of regulations reducing turtle bycatch in U.S. waters and the promotion of bycatch reduction at the International Convention for the Conservation of Atlantic Tuna (ICCAT), one of the world’s most powerful regional fishery management organizations. 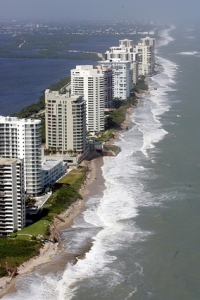 Coastal Policy Reform Initiative
The long-term protection and sustainability of Florida’s beach/dune system and sea turtle nesting habitat is heavily determined by coastal development policies and the engineering tactics employed to protect upland development from coastal erosion and storm events. CCC, through its comprehensive Coastal Policy Reform Initiative, is working on many fronts to reduce development pressures adjacent to eroding shorelines. The long-term goals are better beach and dune protection, limited construction of sea walls, reduced impacts from beachfront lighting and less need for repetitive beach nourishment. Through appointments to state committees, presentations at legislative hearings, and involvement in the coastal regulatory policy, we are making progress in the protection of key nesting habitats. For example, CCC has successfully worked to tighten restrictions on the permitting and construction of coastal armoring. We also are pursuing a reevaluation of coastal building setbacks and supporting stronger dune protection setbacks. CCC drafted and helped pass Florida’s first coastal hazard disclosure law, believing knowledge of coastal erosion rates will encourage a more landward siting of structures and help reduce the demand for sea walls.

CCC recently participated in a gathering of coastal stakeholders to discuss the need for more aggressive inlet management. Out of this meeting developed draft inlet management legislation that CCC now is helping work through the Florida legislature. In an effort to educate the public about the need for reforming coastal policies, CCC recently produced an award winning film entitled “Higher Ground: The Battle to Save Florida’s Beaches.” Nearly 1,000 copies of the film have been distributed to Florida lawmakers, the media, coastal county leaders and affected stakeholders. The film is viewable for free on CCC’s website and is being shown on several Florida public television stations. Through this sort of outreach, CCC is helping build a mandate for reforming coastal management policies affecting sea turtles.

Climate Change
Climate change, while difficult to accurately assess and plan for, poses a serious long-term threat to all of Florida’s nesting sea turtles. Florida’s Governor, Charlie Crist, has embraced the need to address climate change and sea level rise. Working with stakeholders such as CCC, the Governor has launched a process that will develop policies to reduce and mitigate the impacts of climate change. Last year in a keynote address, Governor Crist stated, “With almost 1,200 miles of coastline and the majority of our citizens living near that coastline, Florida is more vulnerable to rising ocean levels and violent weather patterns than any other state.” CCC has been working to get that exact message across for the last five years, and now the Governor is joining the call to action.

With new attention focused on climate change, CCC has an opportunity to advocate for policies that reduce, mitigate, and eliminate the direct impacts to nesting beaches resulting from sea level rise. Working with an array of state and national conservation organizations, and as a member of the Florida Coastal and Ocean Coalition, CCC is producing a white paper on climate change for policy makers to provide specific recommendations on how to prepare for a warming climate and rising seas. CCC is advocating for adaptation and relocation strategies to lessen impacts to coastal resources, including stronger coastal setbacks and a range of policies to encourage relocation of development away from eroding beaches.

This policy of “strategic retreat” will need to include options such as the transfer of development rights; tax incentives for landward relocation; rolling easements that gradually transfer properties impacted by erosion into public ownership; buyouts of condemned and repetitive loss properties; and direct acquisition of beachfront properties. Governor Crist, by Executive Order, established the Action Team on Energy and Climate Change to lead the State in developing strategies to address climate change. CCC has been appointed to the technical advisory committee charged with helping the Action Team develop strategies to mitigate the impacts of sea level rise. In addition, CCC is working to ensure the state’s beach management and coastal development policies incorporate and prepare for differing sea level rise scenarios. Until very recently, these ideas had fallen on deaf ears.

CCC is committed to ensuring the recovery of all U.S. sea turtle populations and anticipates the lessons we are learning in Florida will be applicable to other states. While the future of Florida’s loggerhead sea turtles and their nesting beaches is under considerable pressure, we remain vigilant and hopeful that policies can be implemented to ensure the long-term protection of both. Their fate is in all of our hands.