After the recent deaths of an estimated 300 green sea turtles at the Cayman Turtle Farm in the Cayman Islands, Sea Turtle Conservancy has joined the World Society for the Protection of Animals in their campaign to stop sea turtle farming (www.stopseaturtlefarm.org) at the last remaining facility to intensively farm and breed sea turtles for human consumption in the world. 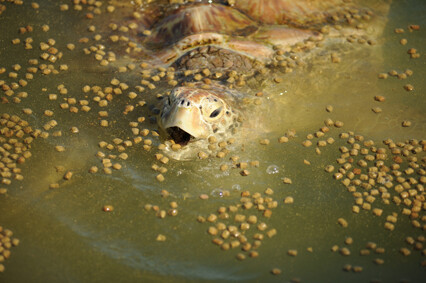 Sea Turtle Conservancy has objected repeatedly to the Cayman Turtle Farm’s release of captive-raised turtles into the wild, which have the potential to affect wild populations in the broader Caribbean. The problem with releasing Cayman Farm-raised turtles into the wild is three-fold. First, well-documented diseases found primarily in captive turtles can be spread to wild populations. Second, the turtles that are breeding at the Cayman Turtle Farm originate from many different oceans and nesting colonies, which means they have very different genetics. If their offspring are allowed to mix with and mate in the wild, it could have far reaching impacts on sea turtle navigation abilities and genetics. And third, the Cayman Farm’s turtle release program gives people the false impression that conservation of sea turtles in the wild can be accomplished simply by breeding turtles in tanks and the releasing them.

“The Cayman Turtle Farm tries to promote its operation as something beneficial to wild turtle populations,” said David Godfrey, Sea Turtle Conservancy Executive Director. “Despite the lack of evidence that the turtle release program actually benefits the wild population, countless individuals around the world are led to believe that the program works and that it is a successful option for saving and restoring wild sea turtle numbers.”

In addition to the Cayman Turtle Farm’s detrimental impact to wild populations, a recent undercover investigation by the World Society for the Protection of Animals produced video footage and photographs revealing thousands of sea turtles kept in dirty, over-crowded enclosures conducive for the spread of disease. Sea turtles packed on top of each other are left to swim in their own waste and fight for food—miserable conditions that often result in cannibalism among the turtles. WSPA investigators witnessed numerous turtles with missing flippers, chewed off by other turtles competing for survival in these appalling conditions. 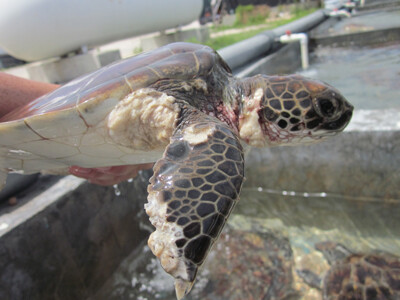 “It’s truly horrific to see this type of neglect and cruelty taking place at a tourist attraction. Life in the Cayman Turtle Farm is a world away from how sea turtles live in the wild,” said Dr. Neil D’Cruze, WSPA Wildlife Campaign Leader.

Highlighting this neglect is the recent death of about 300 green turtles at the Cayman Turtle Farm after a leak of seawater from a pipe. In a statement from the Cayman Turtle Farm to Wildlife Extra, they acknowledged that “in order to repair the pipe break and avoid a worsening flooding situation, the decision was made to cease pumping sea water into the farm through the main pipe system.”

“In essence, once the tank was drained, the turtles were left piled on top of each other to cook to death under the Cayman sunshine,” said Godfrey. “It’s time to turn things around at the Cayman Turtle Farm, and there really is an opportunity to do something positive for sea turtles at this historical site.” Sea Turtle Conservancy is joining the World Society for the Protection of Animals in publicly asking the Cayman Turtle Farm to permanently end sea turtle farming and encouraging members of the public to take action at www.stopseaturtlefarm.org.

About WSPA
The World Society for the Protection of Animals (WSPA) is one of the world’s leading animal welfare organizations. We have been protecting animals around the world more than 30 years. We passionately believe that animal welfare matters. At WSPA, we will always expose and oppose the exploitation and suffering of animals. We believe animal cruelty must end, whether an animal is living in the wild, on a farm, in our community or affected by a disaster. Today, WSPA works in more than 50 countries, collaborating with local communities, NGOs and governments that can help us change animals’ lives for the better. We also act at a global level, using our United Nations consultative status to give animals a voice. Learn more at www.wspa-international.org.