Rounding out the top three was a female loggerhead from Florida named Johnny, sponsored by John’s Island Real Estate Company. Johnny wasted no time heading straight south for the winter, and looks to be spending the holidays near Cuba. We’ve heard it’s nice there this time of year! The race for third place was a definite nail biter, as Johnny just barely edged out fellow loggerhead Carrie (sponsored by Disney’s Animal Programs and Disney’s Vero Beach Resort) in the last few weeks of the race. Johnny ended up finishing only 107 miles ahead of Carrie, who had to settle for fourth place. 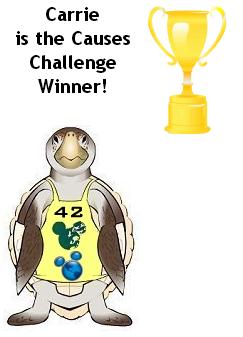 Not to be outdone, Carrie crushed the competition in the separate Causes Challenge, raising $1,500 for her cause of Light Pollution, and earning the title of Causes Challenge Winner. Fun fact: In a Tour de Turtles first, Carrie came back to Vero Beach to nest AGAIN, only two weeks after her original nesting. We know that the females will lay several clutches each season, but we have never documented a TdT loggerhead returning to nest after the start of Tour de Turtles! Good thing Carrie has read all those papers on turtles – she laid her eggs EXACTLY 14 days later. Her second nest was even within 1/2 mile of where she laid her original nest. Our friends with Disney’s Animal Programs also reported that Carrie’s first nest had 161 hatchlings– the largest loggerhead nest they’ve seen this year!

Other honorable mentions in the Causes Challenge also include Florida loggerheads Ripley (5th place) sponsored by Ripley’s Aquariums, who raised $1,100 for Water Quality and Claire (6th place) sponsored by Disney Worldwide Conservation Fund who raised $900 for Plastic Debris. Those loggerheads sure know how to work a crowd! Speaking of loggerheads, it looks like all of our loggerhead competitors are currently hanging out together in the Atlantic ocean not far from Cuba and the Bahamas. Wonder if they’re having a Tour de Turtles party?!

In 7th place was Mora, a green sea turtle released from Tortuguero, Costa Rica, who was named after Jairo Mora Sandoval, a Costa Rican biologist who was tragically killed in May while monitoring a sea turtle nesting beach south of Tortuguero. Some of you might recognize turtle Mora from the July page of our new 2014 Sea Turtle Scenes calendar. She’s become quite the celebrity since making her debut appearance in Tour de Turtles!

In 8th place we had Cruz (sponsored by Shark Reef Aquarium), a green sea turtle released from Tortuguero, who was named after Guillermo “Billy” Cruz, STC’s first Vice President and recipient of the Archie Carr Lifetime Achievement Award, who passed away this summer. Cruz took her time “cruz-ing” along the coastlines of Costa Rica and Nicaragua, traveling 103 miles north of her release spot.

Did you know that both Mora and Cruz both have some amazing photos and videos on our Tour de Turtles website? They were taken by our Tortuguero Field Coordinator Ralph Pace!

Hawksbill turtles Banjo (9th place) and Caribelle (10th place) didn’t stray too far from their original release site near their sponsors at the Four Seasons Resort in Nevis. Caribelle only swam about 235 miles while it looks like Banjo spent her time island hopping in the Caribbean, swimming around St. Kitts, Anguilla, the British Virgin Islands and Puerto Rico. Who can blame her! You can click here to watch a cool video from Banjo’s release.

Even though Tampa Red (sponsored by the Tampa Bay Green Consortium) came in 11th place in the race, her story is full of firsts! She was the first Kemp’s ridley and first rehab turtle to ever compete in TdT. She was rescued by the Florida Aquarium in March when she suffered from buoyancy issues caused by a red tide bloom. Red tide is an algal bloom that produces toxins which can be harmful to sea turtles, fish, birds, and other marine animals. After being rehabilitated, she was released from Bunche Beach, making her the first TdT competitor to be released on the West coast of Florida!

While it appears that juvenile green turtle Relay (sponsored by Turtle & Hughes, Inc.) came in last place in the race, he/she was actually participating in not one, but TWO marathon events! Relay came in first place as part of the Tour de Turtles Bermuda: Race on the Rock!The Bermuda competitor earning second place was juvenile green turtle Venti Anni (sponsored by RenaissanceRe). This was the second year STC held the Tour de Turtles Bermuda, an offshoot of the Bermuda Turtle Project, the world’s longest running in-water study of Bermuda’s turtles, conducted in partnership between STC and the Bermuda Aquarium, Museum and Zoo.

STC would like to thank everyone who made the 2013 Tour de Turtles a great success. Nearly 5,000 people attended sea turtle releases in Florida, Costa Rica, Panama and Nevis. In addition, more than 9,600 people from 119 countries logged on to the Tour de Turtles website in just three months. We hope everyone enjoyed following these 13 turtles on their marathon migration adventures! 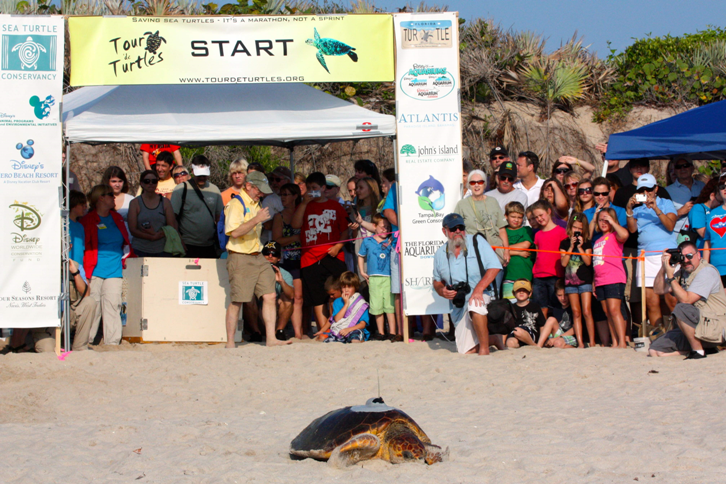