I recently was invited to join a team of veterinarians and biologists working for NOAA and the BP oil spill Unified Command on a trip into the Gulf of Mexico to document and rescue sea turtles impacted by oil. The trip also gave me an opportunity to observe first-hand the current status of ocean-surface conditions and the availability of suitable sea turtle habitat in that region of the Gulf. 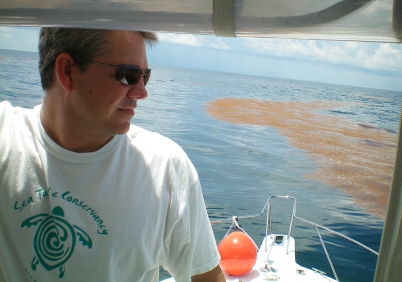 The 12-hour voyage departed from Venice, Louisiana, a small fishing community located at the southernmost point of land where the Mississippi River spills into the Gulf. Joining me on the trip were Dr. Brian Stacy, a NOAA veterinarian based at the University of Florida who has been coordinating sea turtle rescue efforts in the waters south of New Orleans and Dr. Joe Flanagan (a vet from the Houston Zoo). Also participating was Jonathan Gorham of In-water Research Group and representatives from two other conservation organizations (Chris Pincetich of the Sea Turtle Restoration Project and John Hammond with the National Wildlife Federation). Our primary task was to locate and rescue any sea turtles that might have been impacted by the oil spill. 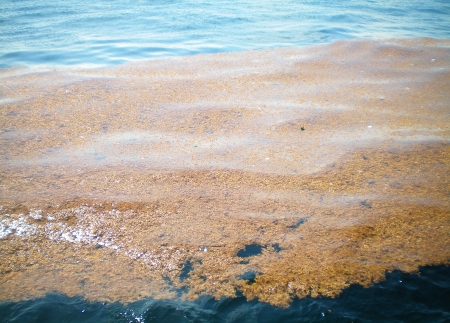 Our trip took us about 50 miles into the Gulf, where we began to spot mats of floating sargassum weed-an important pelagic habitat for both juvenile and hatchling sea turtles. Aside from tiny pieces of plastic and other types of common marine debris mixed in with the sargassum, the habitat we encountered appeared quite healthy. In fact, the mats were teaming with fish and other important marine species such as small shrimp, crabs and other vertebrates and invertebrates that sea turtles feed upon. Over the course of the day we also spotted and recovered two juvenile Kemp’s ridleys that showed no sign of having come in contact with oil.

Considering that this very region of the Gulf was once thickly coated with oil, it seems most likely to me that the sargassum we encountered had drifted into the area, likely from the west, where it never came in contact with oil. Since the beginning of the spill, large amounts of oil-soaked sargassum have been corralled and burned by BP and its contractors. An undetermined amount of oil-soaked sargassum also has died and sunk below the surface by now. In this way, a substantial amount of important turtle habitat has been eliminated from the Gulf. However, this trip gave me great hope that sea turtles and their sargassum habitat are moving back into the region, but full recovery will take significantly longer.

My most striking memory from the trip is the complete absence of oil on the surface, despite our close proximity to the Deepwater Horizon oil spill site. On one hand I found it encouraging that the habitat, at least on the surface, appeared healthy. Unfortunately, conditions on the surface don’t tell the entire story about how oil and chemicals used to disburse the spill continue to impact the wildlife and ecology of the Gulf of Mexico. For government and non-government biologists alike, this remains a major concern, and research on what is happening below the surface needs to continue.

Based on my observations on this day and in this location, the surface habitat for sea turtles appears to be recovering a lot faster than most people, including me, thought would be possible. NOAA and other personnel responding to oil-impacted sea turtles are suggesting that their efforts to recover turtles at sea will soon wind down. While in hindsight it would have been better if more boats and rescue personnel had been in place to rescue turtles at the height of the spill, I can’t find fault with agency plans to scale back now. In fact, at this point chasing little Kemp’s ridleys out of healthy habitat seems more intrusive than helpful. Other threats to sea turtles, and especially the risk posed by the reopening of shrimp trawling in Louisiana waters, where state law does not require shrimpers to use Turtle Excluder Devices, presents a more significant survival threat to both loggerheads and Kemp’s ridleys. As efforts to rescue oil-impacted sea turtles wind down, state and federal regulators need to focus on bringing Louisiana commercial fishing regulations into the 21st century, where the harvesting of shrimp is done in ways that safeguard sea turtles and other common bycatch.