Many Floridians work tirelessly to protect sea turtles from the many threats they face on and off the nesting beach. However, a recent coastal update shows that these majestic creatures are in danger from a phenomenon mostly beyond our control: red tide.

Satellite images from the Florida Fish and Wildlife Conservation Commission show a patchy area of red tide recently spotted in the northeast Gulf of Mexico. Red tide is a sudden increase in algae population, which often results in the sickness and death of marine life in the affected area.

According to an article by the Associated Press, this specific algal bloom stretches 100 miles from St. Petersburg to Florida’s Big Bend, where the peninsula ends and the Panhandle begins. The affected area starts a few miles off the cost and is approximately 60 miles wide.

STC is no stranger to the negative impact of red tide. Last year, STC had a rehabilitated turtle named Tampa Red participate in Tour de Turtles. Sponsored by the Tampa Bay Consortium and the Florida Aquarium, Tampa Red was injured by red tide in the Gulf of Mexico.

Loggerhead Melba was recently spotted in the area of the red tide bloom.

STC is keeping a close watch on current Tour de Turtles competitors that have been spotted in the affected area. Loggerhead sea turtle Melba, now in fifth place, has been spending a lot of time off the coast of Cedar Key in the heart of the bloom.

“We should watch this closely to see if the marine animal rehabilitation facilities on the Gulf Coast of Florida begin to see a surge in strandings,” said David Godfrey, STC executive director. “There is nothing that I know of that can be done to lessen the impacts of red tide, but we could be ready with some emergency grants.”

The Sea Turtle Grant Program, which is administered by STC, has helped support facilities that have taken in sea turtles impacted by red tide in the past.

The program gave Mote Marine Laboratory a grant of over $22,000 to investigate sea turtles stranded by red tide in central west Florida in 2005.  Results of that work showed that a neurotoxin in the algae called brevetoxin appeared to be the primary cause behind the strandings of sea turtles that washed up on beaches in the area.

After expanding on that research, scientists now understand the effect of red tide on sea turtles and other marine wildlife is even more alarming.

Mote and the Conservancy of Southwest Florida teamed up during the 2012 and 2013 red tides in and around Pine Island Sound, along Florida’s southwest Gulf coast. The research aimed to understand the effects of red tide on Kemp’s ridley sea turtles, a critically endangered species.

According to an article by news-press.com, the study is the first of its kind to look at the effects of brevetoxin in living and free-swimming turtles.

Blood tests were run on nine Kemp’s ridley turtles, and the results showed high levels of brevetoxin as well as a protein called alpha-globulin. Increased alpha globulin is a sign of inflammation, which means these turtles may seem healthy on the outside, but there’s something serious going on inside.

Mote’s Justin Perrault, the study’s principal investigator, told news-press that Kemp’s ridley turtles are more susceptible to this toxin than other species of marine life. The toxin is absorbed and held in the tissue of filter-feeders such as tunicates, which are a staple in the diet of a Kemp’s ridley turtle.

More information is needed on the impact of brevetoxin, how long it can stay in the turtle’s system and whether it can cause long-term side effects. Likewise, Perrault said the team is looking at how this toxin can affect the reproduction process and already fragile hatchlings.

The turtles were also tracked via satellite during the study. Data showed that the sea turtles seemed to sense the red tide’s presence and actually avoided affected areas. Perrault said that the next step will be to determine how the turtles detect the toxin. 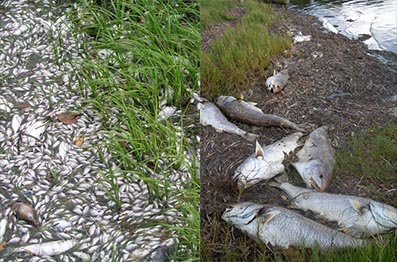 Red tide is negatively impacting many species of marine wildlife in Florida. According to the FWC, fish are most easily affected by red ride because their gills are directly exposed to the brevetoxin. Manatees and dolphins also feed on marine species that easily absorb the toxin, which in-turn exposes them to its harmful effects.

While the causes of red tide are not clearly understood, research is being done to develop a prediction model based on ocean currents, according to the Associated Press article.  University of South Florida ocean scientist Robert Weisberg is among a team of researchers working to develop a warning system, which will track the movement of nutrients that red tide needs to thrive. The article also said that the president is asking Congress for a $6 million increase for research in red tide prediction in the 2015 budget.

In the meantime, you can help minimize other environmental dangers to marine wildlife by recycling plastic bags and reducing other sources of marine pollution. We depend on the health of Florida’s marine ecosystem just as the species that inhabit it do. Harming sea turtles, manatees, dolphins and fish also also impacts the overall marine environment and people that rely on these marine resources for food, recreation and other ecosystem services.