A Turtle Walk to Remember

Written by Janet Nupp Hochella, long-time STC member and BIC volunteer. The 30 plus years of efforts on behalf of turtles earned Janet the prestigious Ed Drane Award for Volunteerism at the 2017 International Sea Turtle Society Symposium. Janet now resides in Melbourne, Florida where she can continue to pursue her passion – sea turtles!

From the first year that Guided Sea Turtle Walks were conducted at the Barrier Island Center, I have navigated the dark sandy beach at Bonsteel Park in hopes of finding a nesting loggerhead sea turtle for the guests, young and old, who have assembled from all parts of the state or the country. As a sea turtle walk scout, I never tire from the excitement of meeting new people. But more gratifying is finding a nesting loggerhead sea turtle to show the guests, most who have never seen a sea turtle in the wild, and to share in the guests’ enthusiasm and appreciation of this special reptile.

Guided Sea Turtle Walks offer a unique educational and outreach opportunity for participants. But sometimes, there is an added bonus. The loggerhead sea turtle that the Friday night scouting crew found on their first walk night of the 2021 season on June 4th was a very special sea turtle! 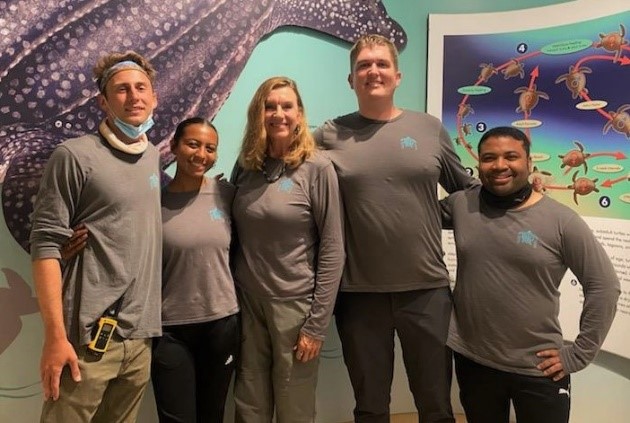 Early into the scouting, while the guests were listening to the educational slide presentation, Turtle South came upon a nesting loggerhead. Scott Beazley and Brandon Garrett radioed to Turtle North, Jenna Coven and me, that they had a small loggerhead digging her egg chamber which would be a good candidate to show the guests. The turtle was not far south of the Bonsteel ramp where the guests access the beach. The Lead, Cindy Pless, was notified and the guests were gathered to get to the beach and to the turtle in time to see the turtle dropping eggs into her egg chamber. This was a small turtle and she was moving right along, but the guests got there in time to see the egg laying process.  Always interested in determining whether an observed turtle might have been encountered by the UCF Marine Turtle Research Group and under the FWC permit guidelines, I requested that we check, after the turtle finished camouflaging her nest, for tags – metal tags on one of the scutes of the inner edge of both the left and the right flippers, and most importantly, for a PIT (Passive Integrated Transponder) tag which could be located in any one of the four flippers. Most importantly because the sea turtle can “lose” the metal tags, but the internal tag is usually permanent and can be read with a PIT tag scanner.

Without the use of any light, Scott and I checked for the metal tags. There was none on the left front flipper…but, bingo, there was a flipper tag on the right front flipper! Because I also volunteer with the UCF MTRG and am permitted to check for tags, I grabbed my PIT tag scanner and immediately got a reading from the right front flipper. Finding a PIT tag is always exciting as it reveals there is a history with the turtle. This PIT tag was not in a series that I recognized so finding out the source of the PIT tag would be very intriguing and important. With only the use of the red headlamp to read the flipper tag and the PIT tag, I asked one of the scouts to copy the number to a clipboard that the Lead carries so that I could investigate the source of the tag numbers. 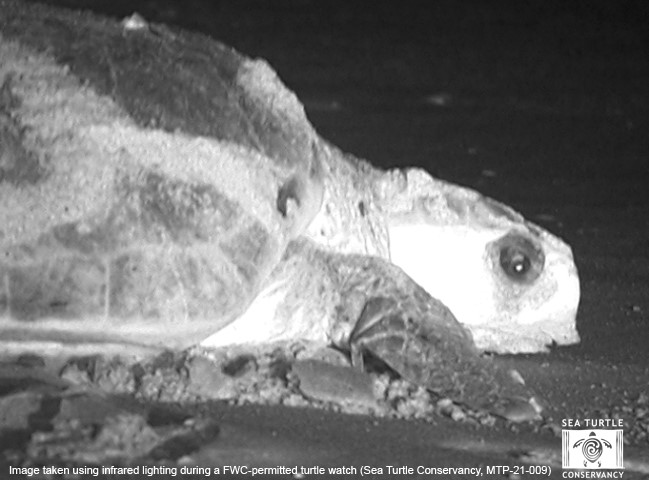 Upon checking with the University of Central Florida Marine Turtle Research Group who monitor and conduct sea turtle research on the Archie Carr National Wildlife Refuge, I was informed that this turtle most definitely had a history. Not only was the turtle seen on the Archie Carr National Refuge by the UCF researchers almost 18 years prior, she was originally encountered by a NOAA group in Florida Bay 21 years ago. I would need to contact Barbara Schroeder, National Sea Turtle Coordinator of NOAA-NMFS, for the particulars.

After several attempts through various channels, I was able to connect with Barbara Schroeder. I was thrilled to learn that the turtle we encountered was one that Barbara Schroeder herself has researched and documented over many years as part of the FFWCC/NOAA Florida Bay Sea Turtle Project. 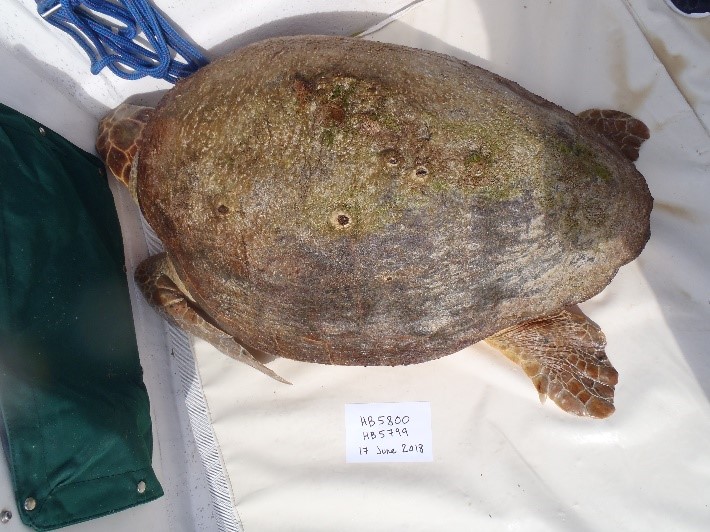 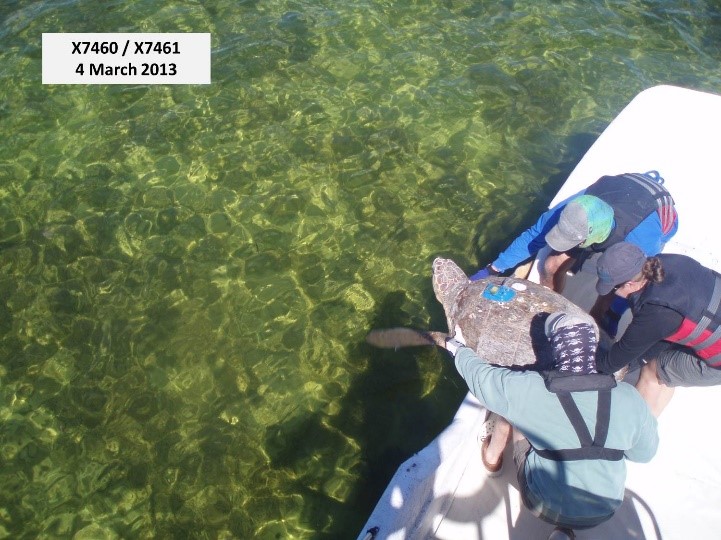 This small loggerhead has quite a backstory! Barbara Schroeder writes in an email “this turtle was first captured by us in Florida Bay in 2000, she was an adult then (you can see her length has not changed). In March 2013 we satellite tagged this turtle after ultrasound revealed she was preparing to breed that summer and she was seen nesting at ACNWR in June 2013 and of course her satellite tag data showed us the same. We named her “Shiver” as it was very cold in March 2013 when we captured her.”  Summary records that Barbara Schroeder sent along in the email show that the turtle has been recorded as seen nesting on the Archie Carr National Wildlife Refuge in 2016, 2018, and now in 2021. 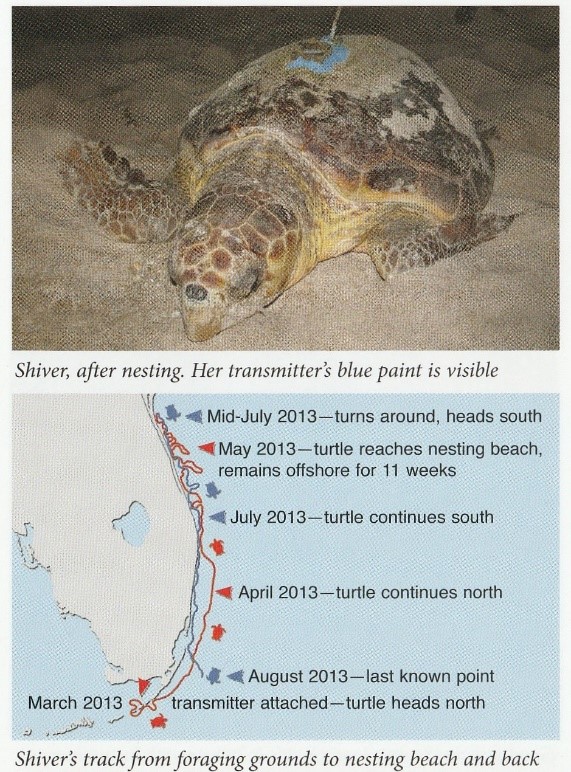 years. Shiver gained celebrity status with her own write up in Blair E. Witherington’s book Our Sea Turtles published by Pineapple Press in 2015.  Dr. Witherington used Shiver’s data, provided by the FFWCC/NOAA Florida Bay Sea Turtle Project, to exemplify the reproductive migrations of sea turtles.  In his book on page 123, Witherington writes “To track her movements over her upcoming nesting season, the researchers attached a satellite transmitter to Shiver’s carapace. Her broadcasts indicated that she left Florida Bay to enter the Atlantic in mid-April and moved along the Florida coast to the Archie Carr National Wildlife Refuge, covering the roughly 250 miles (400 km) trip in about two weeks. Shiver lingered off the refuge and deposited several clutches over an 11-week period. Not long after her last nest, Shiver set off for home, nearly reaching her home waters of Florida Bay after a three-week swim.”  The photo to to the right, taken from the book, shows a photo of Shiver and her migratory path in 2013.

As sea turtles generally nest every two years, Shiver probably won’t be encountered on her nesting beach this year. Finding her again in the 2023 Sea Turtle Nesting Season would truly be a stroke of luck with the hundreds of loggerheads that nest multiple times every season on the Archie Carr National Wildlife Refuge. But the Sea Turtle Conservancy Barrier Island Center Sea Turtle Scouts will be out there again this 2022 season. Who knows what sea turtle we will encounter on our guided sea turtle walk night. All of the sea turtles are special! Like Shiver!